skip to main content
Return to Fordham University
You are at:Home»Business and Economics»U.S. Stimulus Bill is a Good Start, Says Professor

On March 27, President Trump signed into law a $2 trillion emergency aid bill, passed by Congress to help Americans weather what is expected to be a painfully long economic downturn brought on by the COVID-19 pandemic.

Steve Raymar, Ph.D., associate professor and chair of finance and business economics at the Gabelli School of Business, said the bill, the size and scope of which has no precedent in the country’s history, contains many elements that will help prop up the economy for the next few months. 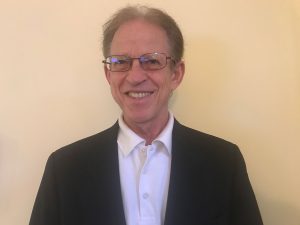 Steve Raymar has been teaching finance and business economics at Fordham for 27 years.

The 600-plus page bill features direct payments to Americans, expands unemployment benefits, provides loans through community banks and through the Federal Reserve, and provides $100 billion for hospitals. But, he said, it should not be the last action government takes.

“What the government seems to be doing is certainly appropriate and proper. It will support businesses and individuals, but there may be no way to prop up the economy when the economy is not operating,” he said.

“We need to be open to even more unusual types of policies that might relate to loan and rent forgiveness and postponement of bankruptcy.”

It’s an area Raymar has spent a lot of time researching during his 27 years at Fordham. Credit Risk Management/Credit Derivatives, a class he’s taught for the past six years for the Gabelli School’s Quantitative Finance master’s program, for instance, focuses a great deal on the causes of the 2008 Financial Crisis. In the 12 years since, many lessons have been learned, some of which are applicable to today.

Raymar said that if Congress and the president truly want to help Americans back on their feet, they will need to do something just as radical as spending $2 trillion: They’ll have to suspend rent and mortgage payments. Otherwise, the money the government is sending to citizens will simply be funneled from their bank accounts back into the real estate industry to support mortgage bonds. They won’t be able to spend it anywhere else without putting themselves in danger, he said.

The resulting lack of additional income, he said, will hit other industries hard.

Some industries will benefit, he said, particularly businesses that manufacture home essentials, the technology industry, and medical supply manufacturers. But that won’t be enough on its own, and Raymar said U.S. leaders should remember that the country has economic tools available to it that other countries do not.

“In these kinds of crises, it almost doesn’t matter how much the government spends because the U.S. is in a unique position throughout the world, perhaps along with a country like China, where it can simply authorize the Federal Reserve to finance whatever the government wants to spend. That’s essentially the way the big bailouts from 12 years ago worked,” he said.

One of the challenges going forward is the fact that, because of the stay-at-home restrictions, there is no historical precedent to look to for guidance. Even the Great Depression is not a good guidepost, he said, because when the United States government began paying workers—in this case to help fight World War II—those workers could spend that money freely and immediately. Now, people are confined to their homes and can’t patronize local businesses and entertainment venues.

“The only thing that can affect the speed of the virus declining is more of this social distancing, and more emergency supplies to the hospitals. If anything, that’s where the real emergency push from the government should go. A lot of the U.S. isn’t too much affected yet, but most of it is, and those are the places that they really need someone to really push and organize all the medical supply flow,” Raymar said.

A follow-up will be needed in the next few weeks though, and Raymar said it should include a forbearance, or holding back, on rent, interest bonds, mortgages, and bankruptcy proceedings. This policy would impact the huge mortgage bond market, but the Federal Reserve is already planning to support it, and could do even more quite effectively.

“You’re not absolutely forgiving those payments, but you’re just saying, ‘Hey, they’re postponed.’ The same way everyone else in the U.S. is postponing their life, perhaps the real estate industry, bond recipients, and the interest recipients could be asked to postpone their life,” he said.

If there is a smidgen of hope to come out of the pandemic, it’s that some lessons have been taken to heart from the passage of the Troubled Asset Relief Program (TARP) program, which Congress passed in 2008. After intense partisan debate, the current stimulus bill emerged in a form that is less targeted toward large corporations than TARP was, and more even-handed in its treatment of individuals, especially in its provisions for unemployment benefits and direct payments. One of the main criticisms of TARP was it was seen as primarily a bailout for big banks and the automotive industry.

But he also noted that for all of TARP’s faults, it’s possible that major banks could be in even more trouble today than they are, had it not been for a key part of that legislation. “Stress tests,” which were a part of the legislation, were administered to the largest banks in the country by the Federal Reserve beginning in 2009 as a way to measure how much capital banks had on reserve. The banks were required by law to always have a certain amount on hand, so as to insure that they could weather a severe economic downturn without government intervention.

None of the tests could have predicted exactly how the current situation would have unfolded, he said, but it’s fair to say that the stress tests have worked as they were intended, and the banks will not need bailouts like they did in 2008.

“Banks are holding up much, much better than they would have if they were operated and capitalized the same way they were in 2006,” he said.

“If the banks were operated now as they were then, we would have another really severe financial crisis on our hands. So this was also a very major lesson learned.”