skip to main content
Return to Fordham University
You are at:Home»Business and Economics»TIAA President and CEO Counsels Fordham Students
Photos by Taylor Ha
Roger W. Ferguson Jr., president and CEO of Teachers Insurance and Annuity Association of America (TIAA), spoke to a small group of Fordham students about his life and career at the Lincoln Center campus on Oct. 3.

“I loved finance and economics. I tried to figure out a career [that used both]. I would not have been very good as a journalist or poet. I obviously am not going to be a great basketball player,” he said in Lowenstein’s Plaza View Room, to laughter from the students. “You’ve got to be true to yourself.”

Ferguson was raised in Washington, D.C., during the civil rights movement. His father served as a U.S. Army cartographer; his mother was a public school teacher. Ferguson started his education at a segregated elementary school and later won a scholarship to Sidwell Friends School, one of the top private schools in the nation. From there he was on to Harvard, and, later, embarked on a career path that took many twists and turns. 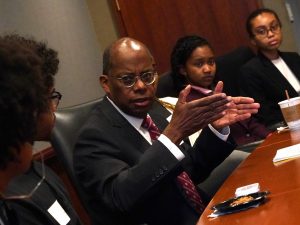 “Careers are not very predictable,” said Ferguson, who often speaks to students and meets with administrators at colleges and universities, which are a large portion of TIAA’s client base. “People often talk about a career ladder. The image is very clear, very straight[forward]… My experience is much more like a climbing wall. You move left, you move right. You try something that maybe you trained for and didn’t like—in my case, the law—but then you can figure out ways to go forward.”

Ferguson’s three degrees in economics—all from Harvard—carried him across the country. He worked as a lawyer, consultant, and leader at several different companies. Among them is the U.S. Federal Reserve, where he served as vice-chairman of the board of governors from 1999 to 2006—the first African American to do so. In 2008, he started his current role at TIAA, a Fortune 100 financial services company that has managed people’s savings for more than a century.

For almost an hour, he spoke with a small group of undergraduates, who hail from boroughs as close as the Bronx and states as far as California. Most of the students are in Fordham’s Collegiate Science and Technology Entry Program (CSTEP), which helps minority and economically disadvantaged students prepare for their careers.

The main theme of their discussion was diversity and inclusion. Prioritizing these things not only leads to better decision-making, said Ferguson—it’s also “the right thing to do, morally and ethically.”

Ferguson described the ways that TIAA has incorporated diversity and inclusion at home. In the 1980s, the company hired Clifton Wharton, the first African-American CEO of a Fortune 500 company. TIAA also has several employee resource groups—diverse organizations that provide professional development for employees. The association for LGBTQ+ professionals and their allies has helped conduct internal company training, said Ferguson. Meanwhile, the Latino and Hispanic network has improved TIAA’s ability to counsel in Spanish, he added.

“It allows diverse populations to find the place where they might feel a bit more at home, so to speak. But importantly, everyone is allowed to be a member of all our ERGs,” Ferguson said. “We don’t want them to be isolated.” 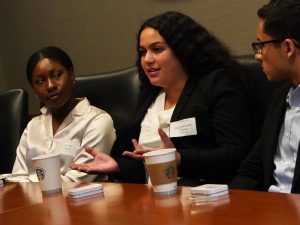 In a Q&A session, students asked Ferguson about the challenges of being the first person of color in a high-level position and how TIAA is teaching young people about financial literacy. They also talked about microaggressions, including the ones that Ferguson has personally faced. He said it’s often difficult for him to catch an uptown cab in New York City. He also recalled the time he dined at a “fancy” restaurant and the waiter gave the check to the white person at his table—but Ferguson was the one paying the tab.

“That kind of stuff does happen all the time,” Ferguson said. “But again, I can’t let somebody else’s foolishness demean my own sense of worth and self-confidence.”

Hector Bonilla, a Fordham College at Lincoln Center senior studying economics, asked Ferguson about how difficult it is to find and hire candidates of color. Ferguson recalled a person who once asked him, “What do you say to a CEO who says, ‘I can’t find a woman qualified to be on my board?’”

His answer was short but simple: “You’re not looking hard enough.”

In his last comments to the students, Ferguson advised them to finish their education at Fordham, take “reasonable” risks in their careers, and leverage their natural strengths. He also reminded them of what diversity and inclusion are all about.

“Ultimately,” he said, “it’s about being very respectful of human beings.”