skip to main content
Return to Fordham University
You are at:Home»Business and Economics»Thinking Outside the Box Puts Alumnus on Top

At last fall’s Value Investing Congress in New York City, Ryan Fusaro, FCLC ’07, made a name for himself alongside billionaire hedge-fund heavyweights Bill Ackman and David Einhorn, who were among the speakers at the event CNBC has dubbed the “Super Bowl of Value Investing.”

Fusaro’s presentation on the national hamburger chain Jack in the Box earned him first place in the Value Investing Challenge Contest and a chance to share the stage with some of the world’s most respected investors.

“It was almost surreal to present among these luminaries. It’s a cool experience,” said Fusaro, an analyst at LionEye Capital Management. “It was kind of like American Idol for investing.”

“[The contest] gives you the opportunity to be heard. The challenge is an inspiring idea because it’s very merit-based, no pedigree required,” said Fusaro, a native New Yorker. “An average guy can present here and if you have a good idea, you could win.” 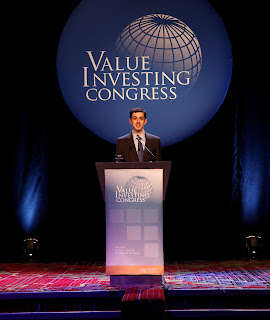 From more than a 100 contest applicants, a panel of anonymous money managers selected three finalists, and then 4,000 value investors voted for a winner at the conference. In his winning presentation, “Thinking Outside the Box,” Fusaro talked about the value of investing in Jack in the Box. The company, he said, has “substantial hidden assets,” including its franchise Qdoba Mexican Grill and rent-generating real estate assets, which are not currently factored into its share price. If factored in, he said, the company’s “shares could conceivably be worth $57 by 2015, significantly more than where it was trading given all those attributes.”

After his Value Investing Challenge victory, Fusaro was named to Forbes’ 30 Under 30 in Finance, a list of young men and women who are making their mark at investment firms, hedge funds, and other financial firms.

“It’s an honor. I try not to take it to heart, but it does feel incredible to get credit for things I’ve been working on for a long time,” he said. “It’s a stamp of approval.”

It was at his first job after Fordham, at Ramius Capital, where he realized he liked value investing. He started to learn investors’ thought processes and what makes for a good investment idea. With that inspiration, Fusaro started putting together his own investment presentations after work and on weekends. He personally invested in the companies he recommended and shared the presentations with people in the industry whom he admires. “Some replied and some didn’t, but it was a great way to learn and get feedback on my work. That was a real honor,” he said. “I developed a little network and made new friends in the business.”

“A lot of the topics could be taught in a way that was dull, but he presented them in a way to keep you interested,” said Fusaro. “His course textbooks were one of the few textbooks that I kept after Fordham. That’s a testament to him and his courses.”

After graduating from Fordham, Fusaro looked for a way to stay connected to the University. About three years ago, he joined the Young Alumni Committee, which promotes the University’s young alumni-focused programs and services, and he now serves as the committee’s secretary.

“It’s a unique committee in that you’re trusted with a particular level of confidence and license to build up Fordham,” he said. “Fordham embeds certain traits in you. It makes you curious; it makes you want to understand the world.”