skip to main content
Return to Fordham University
You are at:Home»Business and Economics»Scholar Urges Collaboration Between Theology and Economics 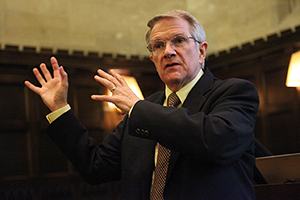 When Pope Francis criticized the notion that “trickle-down” economic growth leads to greater justice and inclusiveness in the world, he reignited a debate about what religious leaders should contribute to conversations about the economy.

On March 3, Daniel K. Finn, Ph.D., laid out his vision for what such a conversation might entail.

Finn said that, for more than 1,000 years, Popes have relied upon economists for their counsel. Today it is paramount that those currently in these disciplines look outside of their “silos” and overcome their context bias.

Finn said that behavioral economics is one area that is discovering much about poverty. He praisedScarcity: Why Having Too Little Means So Much, by Sendhil Mullainathan and Eldar Shafir (Times Books, 2013) for explaining how the context in which we live affects our decisions.

Mullainathan and Shafir, he said, demonstrated how scarcity affects the mind. When you’re short on something like time, it captur
es the mind and focuses your attention. You develop what’s known as a “tunneling dividend”: The more you focus on one thing, the better you get at it.

“Scarcity causes a kind of bandwidth tax,” he said. “If you’re scarce in some way, your bandwidth is being used by the thing you’re worried about,” he said.

The researchers also measured the IQs of Indian sugar cane farmers both before a harvest—when they were poor—and then after the harvest when they were relatively well off. The IQs measured lower under the duress of poverty.

“Time and again, they’re finding that under the stress of scarcity, in this case poverty, people actually perform less well. They’re not less able people than wealthy people, but the poverty itself brings about this change,” Finn said.

“One possible outcome here is to realize that long-term deadlines for the poor misunderstand poverty-induced tunneling.”

Turning away from economists and toward popes, Finn delved into the musings of Pope Benedict XVI on the role of trust in markets. In the 2009 Caritas in veritate 35, Pope Benedict wrote that markets cannot fulfill their proper economic function without “internal forms of solidarity and trust.”

“The market doesn’t exist in a pure state. It’s shaped by cultural configurations that define it. So the market we have isn’t the market we’re doomed to have. We can have a better market than the one we’ve got,” Finn said.

The “economy of communion,” or civil economy, has been held up by both Popes Benedict and Francis as an alterative to profits-first enterprises. Businesses that embrace the civil economy direct their profits equally to the poor, to education, and to reinvestment in the firm.

But even if big business isn’t quite ready for this, reciprocity—when an exchange is tacitly paid forward rather than contractual—is an area where they can make an impact, Finn said.

“When possible, firms really ought to move self-consciously away from contracts and toward relations of reciprocity for a richer life, and more meaningful business,” he said.

Finn’s talk was part of a weeklong series of lectures on the good economy and was sponsored by theCurran Center for American Catholic Studies.