skip to main content
Return to Fordham University
You are at:Home»Business and Economics»Real Estate’s Aerial Future Showcased in Class
A DJI Mavic Pro drone, one of two flown at the Rose Hill campus as part of a class on real estate.

Photos by Kevin MeenanDrones will soon be ubiquitous in New York City. It’s only a matter of time. And when they are, Gabelli School of Business students will be ready, thanks to a live demonstration recently held at the Rose Hill campus.

The demonstration of a medium size DJI Inspire 2 drone and a small DJI Mavic Pro drone, inside the Lombardi Fieldhouse, was part of Introduction to Real Estate Finance, a class offered to Gabelli undergraduates as part of the colleges’ alternative investments concentration. Both drones flew short flights in the middle of the fieldhouse as Gabelli students gazed up attentively.

Roseanne McSween, Ed.D., senior director of development and adjunct professor at Gabelli, said she invited a representative of White Plains-based City Dronez to campus as part of a unit on the disruptions in real estate finance. In addition to real estate finance, classes in the concentration cover hedge funds, private equity and venture capital, and alternative investment strategies. 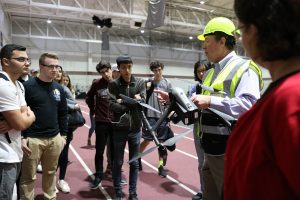 In Real Estate, Plenty of Potential

Drones have many uses in the real estate world, McSween said. As an example, she noted that workers currently inspect the sides of buildings under construction in person. It’s dangerous, expensive, time-consuming and absolutely necessary work, and it can also be done by drones, once authorities such as the Federal Aviation Administration (FAA) give the go-ahead.

“There are all sorts of applications for this kind of technology that the students hadn’t ever thought of,” she said.

“We colored in a whole range of uses for it that relate to land, real estate, and construction.”

Kevin Meenan, FCRH ’77, GABELLI ’82, cofounder and CEO of City Dronez, said the days of drones buzzing alongside unfinished skyscrapers are not here yet. The FAA is taking its time studying the feasibility of the drones in cities, because, as with any new technology, it only takes one accident to tarnish an entire industry. But the time when drones are cleared to fly highly-regulated routes to destinations in major cities is not far off, which is why he said he and his partner named their business City Dronez when they started it in 2015.

That’s due in no small part to the fact that Amazon delivers five billion packages annually under their Prime program. Meenan noted that four billion of those packages weigh five pounds or less, and 80 percent of Amazon’s cost of delivering a package is in the last mile of delivery. Drones are ideally suited for such short, small deliveries, and can do the job much more cheaply than humans in trucks.

“The pressure that Amazon, FedEx, and UPS are putting on the government is really driving the agenda for the FAA and private partners to figure out how to get drones into the air as safely and as quickly as possible,” he said.

Drones are already being used extensively in the agricultural sector to survey crop fields. In addition to photos and videos, they can be outfitted with devices that can capture thermal issues and atmospheric readings. 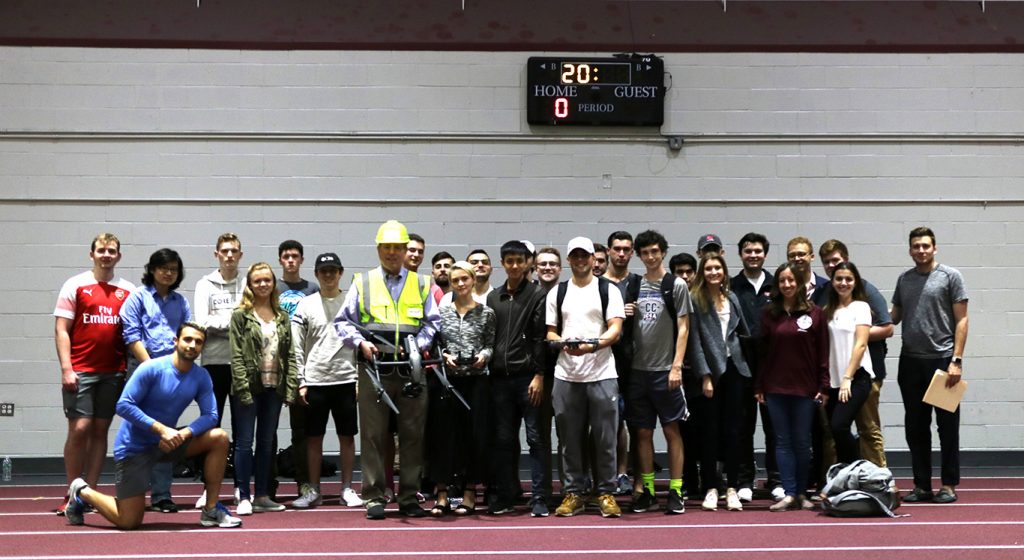 Introduction to Real Estate Finance, the class that watched the demonstration, is part of the Gabelli School of Business’ alternative investments concentration.

A Natural Fit For Veterans

“The three skill sets that we need the most are analysts, pilots, and logisticians, and there are tens of thousands of them coming out of the military. We believe that it’s an incredible source of talent,” he said.

“My partner spent 30 years in the military, and he’s very committed to providing them meaningful, exciting, and productive careers in this industry.”

Shea Golden, a junior finance major at Gabelli who is enrolled McSween’s class, said the drones were a lot louder than she expected. What stood out for her was their potential use for surveying bridges to assess whether they need repairs. She was also impressed to learn about how they can be programmed to fly a specific route autonomously for 30 minutes before returning to the pilot. After graduation, she’s hoping to pursue a career in real estate management and investment.

“Real estate is such a tangible asset in business, which I always found interesting. Being in the finance track, you see things like stocks, bonds, and commodities, and I just feel like real estate is unique in that aspect,” she said.

McSween, whose career has included stints at Related Companies and Citibanks’ commercial real estate division, said the demonstration was part of a larger effort to shake off the traditional model of a teacher lecturing to a group. One of the students’ recent assignments was to see how much information they could glean about the financing and development of Hudson Yards, a $20 billion development currently under construction atop the rail yards between West 30th and West 34th streets on the West Side of Manhattan.

“I’m teaching them as much about working as a team in a professional environment as I am the real estate industry,” she said.

“We talk a lot about effective business writing, and I pair them together to edit each other’s writing, do presentations in front of one another, and give each other constructive feedback. We’re constantly getting up out of the chair and interacting with either pairs or groups of students. So it’s not a passive learning experience.”