skip to main content
Return to Fordham University
You are at:Home»Business and Economics»Practicing the Art of the Deal with Regulations in Mind
Michelle Carchedi, center, discusses her team’s simulated business deal with seminar participants. (Photo by Chris Taggart)
Corporate compliance with federal regulations is not an easy thing to achieve, nor is the avenue to a good deal well paved.

That was one lesson a group of 30 participants learned during a Corporate Compliance Institute seminar, in which contemporary issues surrounding the federal regulatory environment were explored.

“We’re really trying to make sure that folks understand that there’s a dynamic involved,” Mario DiFiore, a Gabelli School of Business adjunct professor, assistant dean, and the co-director of the compliance institute, said of the program. “How do you follow those laws, rules and regulations and still kind of put through the business deals?”

To do that, DiFiore and other organizers held a simulation this July in the Hughes Hall trading room deal in which (surprise!) there were compliance issues to figure out. The members of Team 1, playing the role of the front office of an investment firm considering a deal to buy an electric and hybrid car manufacturer, took their time figuring out the proposal’s advantages, disadvantages, and potential stumbling blocks. Two other teams, one playing the part of federal regulators and the other the part of the corporate compliance ground, were also working on the deal. 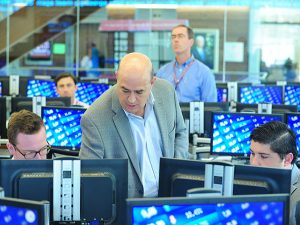 “We’ve been pushing forward programs around business, law, and ethics,” DiFiore said of joint efforts between the law and business schools. “And compliance fits directly into that kind of trajectory.”

The program, now in its third year, also fits neatly into Fordham University’s ethos of combining classroom knowledge and practical experience. Most of the speakers at the event were either heads of compliance at global firms or regulators.

“These guys are pretty high up in the industry,” DiFiore said.

For program participant Michelle Carchedi – the managing director of Class Action Claims Management, a firm dealing with proprietary equity trading data as well as money and claims – the practical knowledge will be useful.

In her business, Carchedi said, she comes across some firms whose compliance efforts are not as robust as they should be. Now a student at Fordham Law School, Carchedi said she is interested in ensuring that her firm’s compliance procedures are strong.

DiFiore said an increasing number of people are realizing the value of a comprehensive understanding of compliance rules, laws, and regulations. A show of hands during the event proved compliance is also an employment growth area, besides being interesting, challenging, and rewarding.

“There was probably about a good third to a half that really were interested in moving into that area,” he said.

Also, attendance at this year’s program was nearly double that of the 2014 event. Half of the attendees were attorneys and the other half came from the world of business.

“I liked the diversity amongst the student body,” Carchedi said. “At first I thought they were all going to be lawyers, and then I thought, ‘Well maybe they’re all going to be accountants.’ It was really a nice mix of everything.”

The interest in compliance is partly the result of a culture change within organizations, DiFiore said. Rules and regulations can seem dry, but ultimately, it’s people who influence the field and are affected by the decisions. That is what made the simulation so effective.

“You can stand here, you can lecture, you can do some case-study stuff and make people work in groups, but I think it starts coming alive when you can practice it,” said DiFiore. 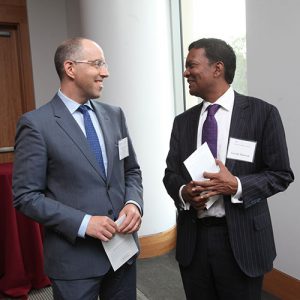 The program also fills a need at the early end of compliance education, said Gerald Manwah, an associate professor and senior director of compliance programs at Fordham Law School. There are few programs like it, he said.

“Most other seminars and conferences in compliance, they tend to cater for a more seasoned compliance officer,” said Manwah, who serves as institute co-director with DiFiore. “This one fills that gap for people who either would like to get into compliance or who have just started in compliance to get the tools and the building blocks.”

The institute also helps to diversify Fordham’s compliance offerings, Manwah said. The University’s commitment to compliance education is now expanding, with a master’s degree program in compliance beginning in January of 2016, he said.

Carchedi said bringing compliance to students’ radar screens as a career option would be valuable as well.

Carchedi said attention to compliance is a positive development for the business world. The financial crisis in 2008 proved to her the importance of vigorous application of regulations.

And as for that simulated business deal?

“There was so much wrong that you couldn’t even…”

“Nobody let the deal go through.”