skip to main content
Return to Fordham University
You are at:Home»Business and Economics»Landmine Survivor Leads Workshop for Business Students
Photo by Patrick Verel
For every student nervous about what kind of impact they’ll have on the world upon graduation, Jerry White had some blunt words of wisdom.

“There is no excuse not to become transformational citizens,” he said at a workshop attended by about 30 Gabelli School of Business students and faculty on Sept. 26 at the Rose Hill campus.

A professor of practice at the University of Virginia, White joined the Gabelli School of Business as one of three Gabelli fellows, along with Katherine Milligan and Patrick Struebi, in August.

White lost his left leg when he stepped on a landmine during a backpacking trip in Israel in 1984 and went on to found Jerry’s Landmine Survivors Network. The group was an instrumental organizer, along with the late Princess Diana of Wales, of the International Campaign to Ban Landmines. He was honored for his efforts when the campaign was awarded the Nobel Peace Prize in 1997.  He went on to become the co-chair of Global Covenant Partners, a nonprofit dedicated to preventing religion-related violence, protecting its targets, and rehabilitating its victims. 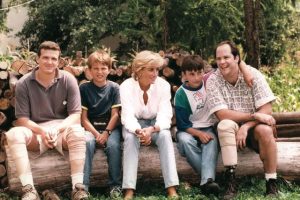 In his workshop, the first of several events that he plans to conduct at Fordham, White showed students how to recognize the difference between the intrinsic values they possess within themselves, and the skills they’ve learned in fields such as accounting, finance, and marketing. It’s possible to marry the two, he said, regardless of what field you work in.

“It’s about aligning who you are and how you see the world, and what you contribute, to create models of transformational leadership, which are needed more and more because of the complex problems we face with uncertainty and volatility around the world,” he said.

Focusing on Vocations, Not Just Jobs

White’s presentation was based in part on the leadership strategies he teaches in his UVA course called Religion, Violence and Strategy: How to Stop Killing in the Name of God. At the gathering at Hughes Hall, he asked students to pick one person whom they considered to be an icon, and come up with three positive attributes that person possesses. They then had to identify one that they themselves possess.

The point, he said, was to get them to think not just about their future jobs, but their vocations. 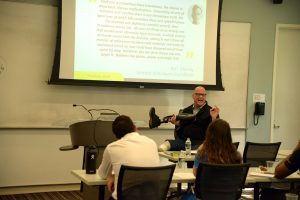 “Resilience is something you have to get in shape for,” White said. “It’s not some genetic gift.” Photo by Patrick Verel

“Students need a shot in the arm. I think they’re very fearful. Their number one pressure is, get a good-paying job that pays off student debt, and their parents will then have a sigh of relief. That’s not a formula for sustainable happiness and impact. That’s a tactical transaction called graduation and having a job, so we can prove it was all worthwhile,” he said in an interview afterward.

“We’re looking at the leaders of tomorrow who have skill sets across all sectors, because that how you change the world. People stand in their values and who they are, whether they’re working at Starbucks, at a U.N. embassy, or at Morgan Stanley. They can make change happen wherever they are.”

An Emphasis on Sincerity

Carina Oriel, a senior majoring in business administration with a concertation in financial technology, said she was pleasantly surprised with the workshop. Although she still has a year of classes left before graduation, she’s already accepted a position in corporate restructuring and turnarounds at the consulting firm Alvarez and Marsal. She said she’s been wondering how she’ll be able to have a positive impact as just one person.

“[White] said we have to cultivate ourselves in a way that’s irreplaceable to the company, wherever we go. That was really helpful for me, because Alvarez is a pretty big firm, and I worry that I will be a little fish in a big pond, and not really stand out,” she said.

“I thought it would be a sort of self-help event, but I didn’t really think I’d come away feeling relieved. After I walked out, I felt like there was a weight lifted off my shoulder. I really came away feeling changed.”

Alexandra Oloe, a junior majoring in finance with a global business concentration, picked the Olympic swimmer Michael Phelps as her icon, and when White asked what attribute she admired in him, she picked humility. Was she also humble, White asked? She hesitated to say yes.

“In order to be an effective leader, you have to be sincere and genuine in who you are.

You can’t fake it. If I want to lead people, I have to be myself. They can’t look up to a fake person. So, I liked his emphasis on being sincere.”

Oloe likewise took to heart White’s advice that one can effect change in small ways by focusing on their immediate community. Two years at the Gabelli School have already convinced her she wants to work for a socially conscious company after graduation, she said, and White’s workshop helped seal the deal.

To gird them for the challenges ahead, White drew upon the lessons he shared in his book I Will Not Be Broken, (St. Martin’s Press, 2008). In it, he talks about “super-survivors”—people who have lived through unspeakable horrors but still find happiness. He notes they all share certain traits that can help students weather whatever issues they may encounter.

Super-survivors, he said, all face facts, choose life, reach out, get moving, and give back. If students learn the recipe of resilience ahead of time, he said, they’ll be better equipped to bounce back when things go badly, whether it’s a family issue, a medical problem, or financial troubles.

“My experience of being a landmine survivor is obviously a very dramatic one, but it makes the point. We’re always saying life’s a minefield, things may blow up in your face,” he said.

“Resilience is something you have to get in shape for. It’s not some genetic gift.”