skip to main content
Return to Fordham University
You are at:Home»Business and Economics»Nobel Laureate Economist Makes Case for Progressive Capitalism
Photos by Bruce Gilbert
Joseph Stiglitz, Ph.D., a winner of the 2001 Nobel Prize in economics, made the case for a radical departure from the traditional, hands-off approach of the U.S. government toward business at an April 24 event at Fordham’s Lincoln Center campus.

“In the 1950s, which is sometimes called the golden age of capitalism, America aspired to be and almost became the first middle-class society. But today, that middle-class lifestyle is moving out of reach,” he said.

“The consequences of that for our society, and our democracy, are enormous.”

Stiglitz, a professor of economics at Columbia University and the author of People, Power and Profits: Progressive Capitalism for an Age of Discontent (Norton, 2019), shared his thoughts in a conversation with Bruce Greenwald, Ph.D., the Robert Heilbrunn Professor of Finance and Asset Management at Columbia Business School.

The event, which was sponsored by the Gabelli School of Business, was Stiglitz’s second recent visit to the University, after appearing at the Rose Hill campus in 2016.

Stiglitz said that although the stock market is doing well and unemployment numbers are low, the economy has grown at a significantly slower rate over the last 40 years than it did after World War II. More disturbing, he noted, is that the average income of the bottom 90 percent of the population has been almost flat for that time. 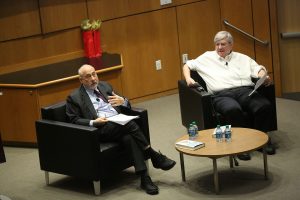 Stiglitz was joined by his longtime collaborator Bruce Greenwald.

The problem, he said, stems from our losing sight of the importance of institutions and principles that have brought us prosperity in the first place.

“We forgot the underlying source of economic growth.”

One pillar of that growth is our drive to learning about the nature of the world around us, he said, also known as scientific research. Another is learning about social organization and how people work together in an exceedingly complex economy.

“Underlying both of these is a way of discovering, assessing, and verifying the truth. So truth-telling institutions are fundamental to our well-being. We ought to realize how important they are and do what we can to protect them,” he said, noting that as a percentage of GDP, funding for basic research is lower than it was 50 years ago.

Americans have also fallen prey to confusing wealth creation with wealth grabbing, he noted, and the embrace of the latter has led to the exploitation of market power, workers, and the environment.

Finally, he said, there has been too little training to help Americans make the leap from an industrial to an information economy, and that’s going to be especially problematic going forward.

“Even if we succeeded in getting our economy to grow a little bit faster, the way the economy is changing means a lot of things are going to be out of reach for all but a fraction of the population,” he said.

“Our economic success is going to be based on a market economy. But we have to inform and change our market economy to make sure it serves all Americans. We’re going to need markets, collective actions, government, and civil society. And we have to restore a sense of balance.”

Solutions Are Out There 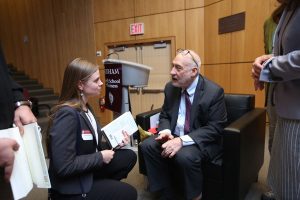 Stiglitz signed copies of his book after the conversation was over.

To address these problems, Stiglitz suggested more regulation to spur competition within the market, including the updating of decades old antitrust laws. Regulations that refocus the financial sector toward providing capital should be strengthened, and government should increase funding for research and infrastructure.

He also called for a “new social contract” that might include a government-funded public option for not only health care, but also for mortgages and retirement.

One area where economists’ views have begun to change, he said, is place-based industrial policies. Whereas it was assumed that people should simply pack up and move to wherever jobs are being created, now economists are starting to recognize the damage that is done to towns and cities that are left behind, like Detroit and Gary, Indiana.

“We forgot the importance that places have for many people, the importance of the social capital that’s embedded in a particular place, and the cost of asking people to move,” he said. 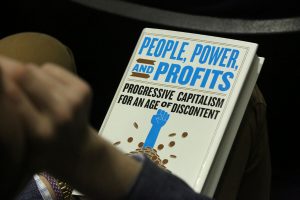 In his book, Stiglitz calls for a new social contract between the government and U.S. citizens.

When it comes to antitrust laws, he said Americans have learned a lot in the century or so since the original ones that broke up the likes of Standard Oil were passed. The European Union is currently leading the way, particularly with the doctrine of “Abuse of Dominant Market Power,” which it has wielded against Facebook and Google, he said.

Retraining citizens to adapt to deindustrialization can be done as well; Denmark dedicates about two percent of its GDP to worker retraining, for instance.

“It’s not perfect, but it doesn’t have the dismal results that we have in the United States,” he said, where we are not investing anything significant in retraining.

Why Is Nothing Happening?

Greenwald said that reading People, Power and Profits led him to think of Stiglitz as a prophet without a sufficient following. Why, he wondered, have few of these ideas been implemented, despite surveys that prove their popularity? Stiglitz said the Electoral College, the U.S. Senate, and gerrymandered U.S. House of Representatives districts are a big part of the problem. But, he cautioned, propaganda is just as problematic.

“One of the things we didn’t think about as much was the problem of disinformation.”

It’s not an accident, he said, that the United States has strong anti-fraud laws. If you can lie about a product, there are many people who will be deceived, and that can undermine the functioning of a market economy.

“Beyond commerce, we don’t have good laws to stop what might be called disinformation. And the realization that you can have a lot of influence and shape a society with disinformation has been with us for a very, very long time,” he said, noting that media mogul Rupert Murdoch has perfected the art of blending politics and entertainment.

“The sad truth is, we haven’t come up with any answers.” 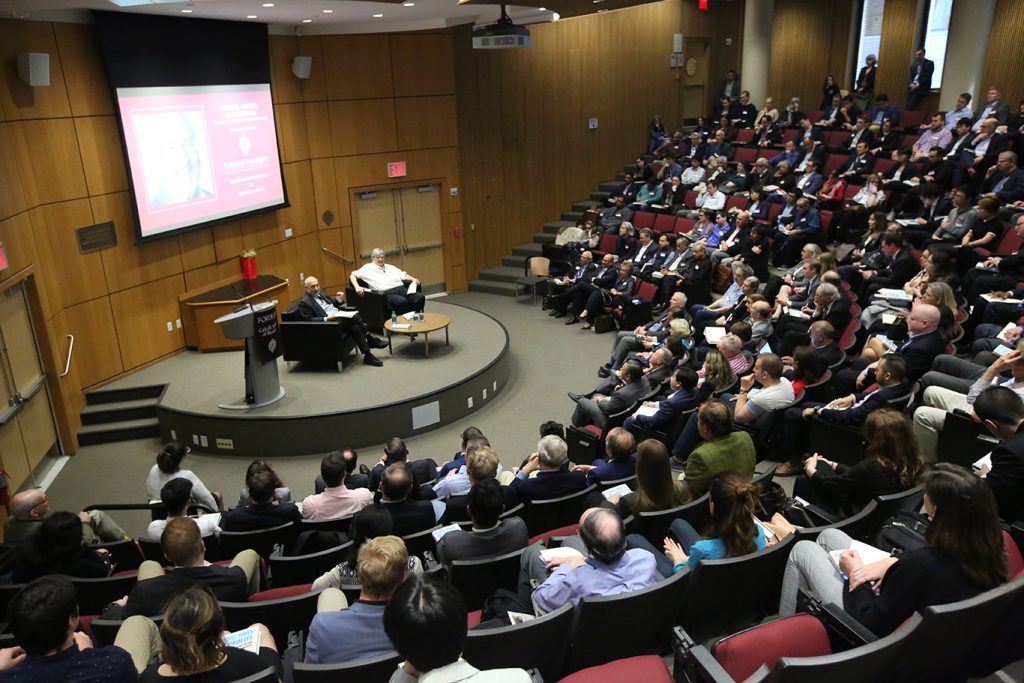