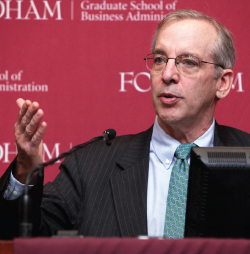 In remarks delivered to the Graduate School of Business Administration’s Fordham Wall Street Council on Sept. 23, William C. Dudley, president and chief executive officer of the Federal Reserve Bank of New York, said that the economy is slowly healing, though it remains challenged by significant headwinds preventing “any meaningful pickup in the economy’s foreword momentum.”

Dudley said that payroll and income tax increases, as well as the Congress’ budget sequestration, continue to drag on the economy. While he remained hopeful that the situation should ease in 2014, he said that ongoing budget battles in Washington could change that.
“It verges on the edge of fantasy [that]there will be a bipartisan collective decision on what to do with the long-term fiscal path,” he said, clarifying that the views were his own and not those of the Fed.

He suggested that such a bipartisan agreement on a fiscal path would go a long way to setting up a financial roadmap the nation would not likely waiver from in the future. Governmental credibility would be reinforced, and Americans would feel less uncertain about spending and investing.

He listed several good economic indicators, including signs that American households are paying down their debt—with delinquency rates on mortgages, auto loans, and credit cards in decline. He said that housing prices have strengthened and that homebuilding has picked up. Lastly, he noted that the private sector’s profit margins have been high, with cash flow strong and credit availability improving.

“Currently, improving economic fundamentals versus fiscal drag and somewhat tighter financial conditions are pulling the economy in opposite directions, roughly canceling each other out,” he said.

Dudley pointed to other concerns, including the “hollowing out of the middle” in the labor market. He said high-end and low-end jobs are doing fine, but the jobs in the middle remain vulnerable to technologies and automation.

“Go to a factory floor in the United States and see how many workers there are—it’s incredibly automated,” he said.  “That has consequences; it affects income distribution.”
Although the Federal Reserve cannot address the issue of income distribution, Dudley said it is “very disturbing” that it has skewed toward the high end over the last 20 years. He said the chance for upward mobility in the nation is “not at all as good as we think it is.”

He said that the full impact of the federal government cutbacks have yet to register completely. He cited university research as one area that will suffer under sequestration, as much of it is dependent on federal grants.

“This will eventually squeeze university budgets over time,” he said.

Dudley reiterated his support of a Sept. 18 decision by the Federal Open Market Committee to continue the Fed’s purchasing of long-term Treasury securities and agency mortgage-backed securities “until the outlook for the labor market has improved substantially.”