Rich Shrestha was working on a research project about consumer behavior in the Bronx when the pandemic upended everything in March. As the economy went into a tailspin, his mind went back to his childhood in New Haven, Connecticut, where his father ran a Subway franchise for a decade.

“I was 8 years old when he first bought it, so I saw him always grinding away every day, putting in 12-hour days. So, I can sympathize with the small business owners who are trying to survive in the age of COVID,” he said. 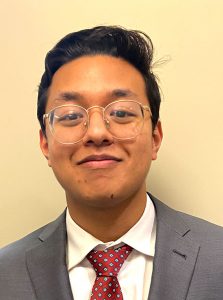 “I saw on my social media channels that friends of mine had parents who were suffering, and they were doing things like advertising for them on Instagram.”

Shrestha, a junior economics major at Fordham College at Rose Hill who’d been working with Fordham’s Social Innovation Collaboratory, reached out to friends he thought might be interested in helping small businesses. Diontay Santiago, a senior majoring in marketing at the Gabelli School of Business, was one of those who answered the call.

In June, they launched the Fordham Business Development Collaboratory. The new initiative, which has a core group of 10 or so students, is split into teams responsible for assisting clients in the areas of finance, marketing, compliance, technology, and most recently, communications. Students offer their advice free of charge, relying on lessons they’ve learned in classes.

For Santiago, who is also the president of ASILI, the Black Student Alliance, the business collaboratory is more than a way to burnish his resume. It’s also way to lift up the borough he has called home his whole life.

“When you’re living in the community, you can see firsthand the debilitating effects of certain things, and you want to do everything you can to alleviate it and use all the resources that are at your disposal,” said the native Bronxite. 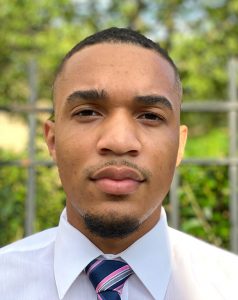 “Doing this sort of thing weds the school to its actual geographic location and allows it to give back to the community it’s inhabited for the last two centuries or so. So when Rich presented me with the opportunity to work with him, I jumped at it. This is something that not only looks good on a resume and is a good experience; it’s relevant to my home and my people.”

The collaboratory currently has eight clients, ranging from restaurants to small independent merchants to nonprofit groups. In addition to word-of-mouth referrals and an intake form on its website, the group has also connected to clients through the South Bronx Overall Economic Development Corporation.

One of their first clients was Seis Vecinos, a Central American restaurant in the South Bronx. Omar Canales, who opened the restaurant eight years ago with his cousin and expanded into a larger location four years ago, said the pandemic had forced him to “kick into overdrive” efforts to increase brand awareness and promote popular dishes such as its papusas. They met with the Fordham students three times over Zoom this past summer.

“I was able to get a different angle how we can better present ourselves online, through search engine optimization and our social media. I also got some extremely helpful pointers when it comes to the main splash page on our webpage,” he said.

He said he appreciated technical advice such as slowing down the transition between photos on the main page of the restaurant’s website. 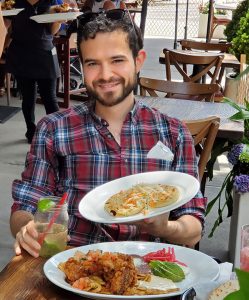 “They also did their own analysis comparing us to our neighboring restaurants, in terms of how and where we can improve our search. Using more Latin American keywords, or using Latin food keywords, or emphasizing more of our menu items, so we appear even higher up, or just as high as other establishments that are offering the same dishes that we are,” he said.

Canales said it’s hard to point to any one suggestion that has driven growth, given how chaotic times are for restaurants these days. But he said the FBDC team’s suggestions have improved the experience of customers, which is ultimately what matters most.

What It Means to Be an Agent of Change

Sadibou Sylla, adjunct professor at the Gabelli School and interim director of Fordham’s Social Innovation Collaboratory, said that Shrestha, Santiago, and all the students who contribute to the FBDC personify what it means to be a “changemaker.” The idea, which Fordham embraced when it joined the Ashoka network of schools, is to tackle societal problems through an interdisciplinary approach.

When the pandemic hit, Sylla convened the students he’d been advising into a COVID-19 taskforce. One of the ideas that came out that group’s meetings was the FBDC. The idea resonated in a special way, he said, because Fordham was founded to educate immigrants in the Bronx community, and today, the majority of businesses in the Bronx are owned by immigrants.

It’s also win-win because students gain real-life experience that they wouldn’t get in a classroom.

“I tell students, when you graduate, the most important question you’re going to answer in your job interview is, ‘What is so unique about you? What’s your story?’” he said.

“And the story is not that you went to Fordham and had this major and had this GPA. The story is you created a structure that helps small businesses to overcome the challenges of the pandemic.”

Working with Shrestha and Santiago was very easy, he said.

Shrestha said that after a burst of activity over the summer, the group slowed down when classes resumed in the fall and everyone had less free time. Now though, he feels they’ve reached an equilibrium both in membership and clientele, and he’s optimistic that it will live on after he and Santiago graduate.

“This is an opportunity to gain an understanding of the community you’re in [as a Fordham student], and how we can be a better part of it and better neighbors,” he said.

“I think a lot of students are starting to realize how important that is, especially after all the things that happened this summer.”