skip to main content
Return to Fordham University
You are at:Home»Business and Economics»New MBA Program Prepares Athletes and Artists for Second Careers
Former NFL player Jack Brewer moderates a panel of retired athletes who have transitioned to the business world. Photos by Chris Taggart
Throughout his childhood in Fort Worth, Texas, Jason Fox was an all-around athlete who dreamed of making it to the NFL one day. After the University of Miami recruited him, he achieved that goal and played in the NFL for several years with the Detroit Lions and Miami Dolphins. But after a series of injuries, he began to plan for the future.

“As much as you think your career is going to last forever, eventually one day it’s going to end,” Fox said. “I wanted to be prepared for life after football.” Fox enrolled in an MBA program designed for athletes at the University of Miami and eventually retired from football. He said that the advanced degree provided the foundations for him to become an entrepreneur. “It gave me the tools and network to launch a tech startup,” he added. After a year in the making, Earbuds, his new social music platform, will go live this fall. 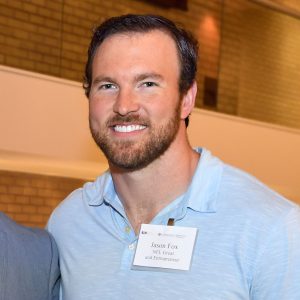 A similar version of the MBA program Fox completed is coming to the Gabelli School of Business. The program, which caters to athletes and artists, was introduced at an August 2 event at the Gabelli School, which included panel discussions by top CEOs and athletes-turned-business professionals.

An Opportunity for Reinvention

“Overall, this segment is looking to reinvent themselves and reinvention is often times arduous,” said Associate Dean Francis Petit, who will oversee this niche Executive MBA. “This program will provide the necessary tools.”

The first cohort is expected to begin in winter 2019, following a curriculum similar to the existing Executive MBA program. Modular in format, it will include team projects, career coaching, presentations, and site visits to companies in the New York area, along with a capstone project.

“In essence, they will travel this academic journey together, similar to their team experiences throughout their playing days,” Petit said, adding that the program will eventually include artists, celebrities, and other creative professionals. “Artists and celebrities have, in one sense, a similar profile to other MBA students,” he explained, in that “they have a skillset that makes them thrive in a particular area. However, in order to have a more comprehensive skillset for creating value in today’s economy—the MBA can be that launchpad.”

The new MBA program is the result of a collaboration with Jack Brewer, who launched the Miami program Fox attended after a career in the NFL playing for the Minnesota Vikings, the New York Giants, and the Philadelphia Eagles.

Education has always been a priority to Brewer, who said he grew up watching his father teach himself to read. Though Brewer earned a master’s degree before he started playing, he saw many of his former teammates struggling after retirement and realized the need for a specialized program. At the Gabelli School, he will help recruit students and serve as a mentor.

“This program is about taking athletes and artists—people who never thought about getting an MBA—and giving them a support system and teaching them how to excel off the field,” Brewer said in his opening remarks at the launch event, pointing out that athletes and artists often have nontraditional educations and many never even have had to apply to college.

Transition Can Be Difficult 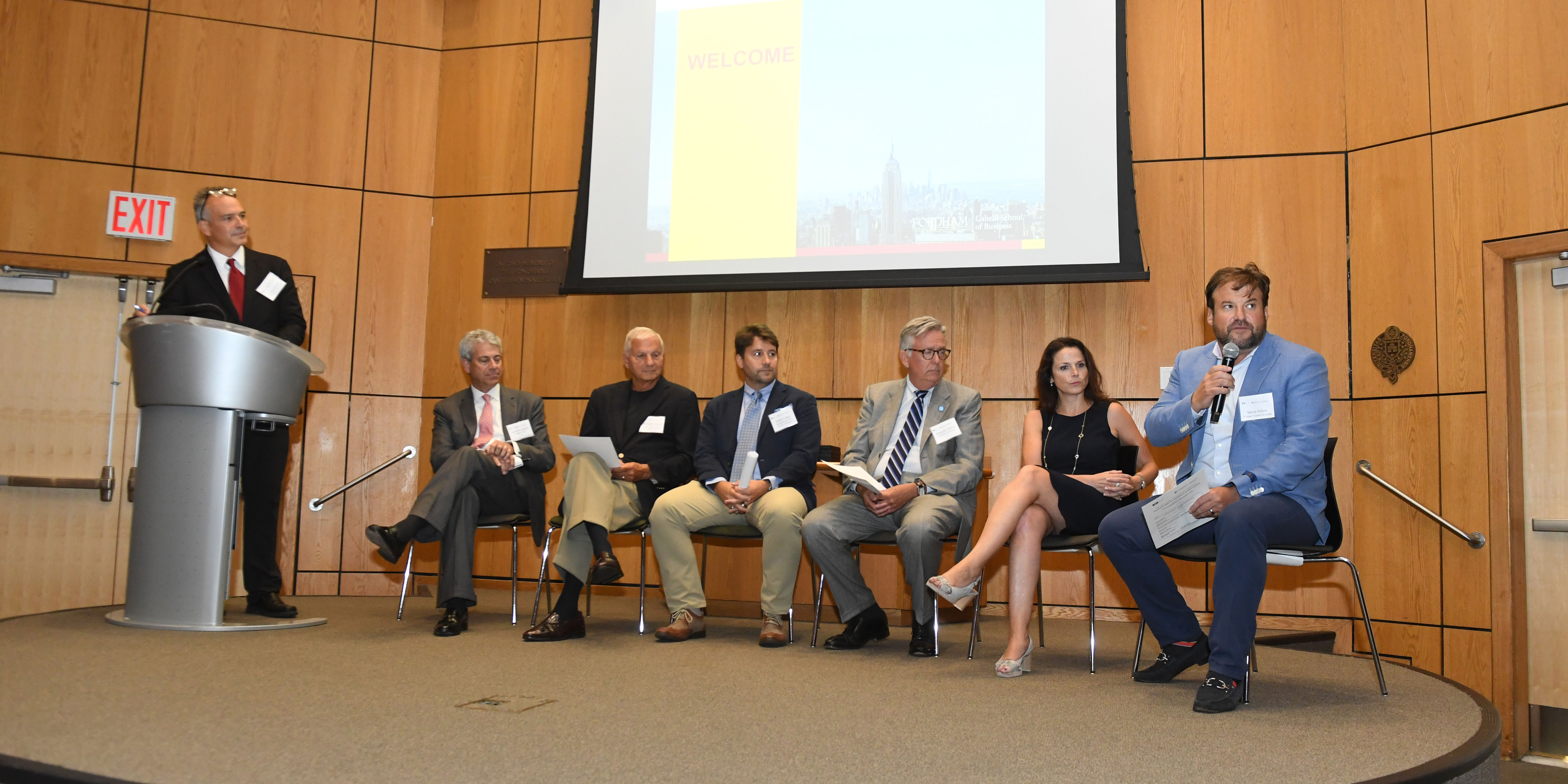 Gabelli School Associate Dean Francis Petit (at podium) moderates a panel of executives in discussing the importance of an MBA for former athletes and others in the business world.

Silton pointed out the assets athletes bring to the business world. “They are so good at recognizing and seizing opportunities,” he said. “That is unique and special. The MBA tempers their enthusiasm to take risks and prepares them to do the full analysis to determine what truly are the best opportunities.”

A second panel discussion revealed insights from athletes themselves about going into business after retiring from sports. Julie Hansson, a former Olympic gymnast from Norway, said she needed to redirect the energy she devoted to intense training throughout her life.

“When you stop, there is an empty space that needs to be filled with something else,” she said. Today, Hansson works for the NBA and her sister Katherine Hansson, also a former Olympic gymnast who spoke on the panel, is an assistant vice president at DNB, a Norwegian bank.

Garrett Klugh, a former Olympic rower, talked about retiring from sports at the age of 29. “The transition from athlete to real life is very difficult,” he said, adding that he returned to school nearly ten years later to earn his MBA. “I didn’t want to be the person in a firm who is a collectible,” he said. “Here’s our Olympian on the shelf.” Klugh felt it was important to separate his athletic background from his business career at a venture capital firm, and the MBA program helped him accomplish that.

Traits that Transfer to the Business World

Serving as a panelist, Fox reiterated that athletes possess many characteristics that, with proper direction, can successfully transfer to the business world. “We are very competitive and forward thinking,” he said, emphasizing the value of working alongside like-minded high achievers in the MBA program. “It created such a great ecosystem. Everyone was willing to collaborate and help each other.”

“These individuals succeeded because they know the meaning of determination and hard work,” she said. “We’re very excited to help former athletes and artists transition into successful business careers.”