Gabelli Launch gave the MBA candidates, who hail from India, China, Haiti, Italy, Brazil, Germany, Ireland, Peru, South Africa, Taiwan and the United States, not only a chance to get to know each other before classes started but also an opportunity to be stretched in important ways. Week One focused on helping the students discover their own leadership style. Week Three focused on specific dimensions of the job search, and long-term career development. And Week Four threw them into the world of data and analytics, asking the students to tackle an industry that they knew nothing about—3-D printing. 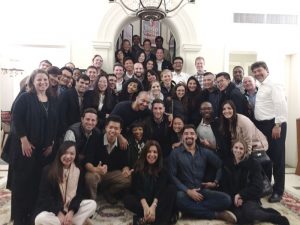 But it was Week Two that took the entire cohort to Buenos Aires, Argentina, where they engaged with a unique service learning consultancy challenge, putting their marketing, negotiation, financial, cross-cultural communication, time-management, and problem-solving skills into action before the MBA program even began.

“Coming to the States for an MBA can be challenging [because of] different cultures, language, and social barriers,” said MBA student Ramon Barbosa, a managing consultant from Brazil, who credits the weeklong trip for helping to break those barriers. “I know that my MBA experience is going to be enhanced in ways that it wouldn’t—if not for the trip.”

From Aug. 5 to 12, the students worked as advisers to nonprofits that included Energizar Foundation, an organization that promotes renewable energy in Argentina and Latin America; Fundación Emanuel, a pioneering foster care program in La Plata; and FC Bola, a new soccer ball business helping children living in impoverished communities. Some of the NGOs sought guidance in drafting a branding and marketing plan. Others were struggling to develop a corporate strategy, and a few required recommendations on how to diversify their fundraising models to achieve greater impact.

“The students were on teams that were constructed to be cross-cultural in nature, dealing with clients who were not native speakers of English,” said Benjamin M. Cole, Ph.D., director of the Full-time Cohort MBA and Professional MBA programs, who accompanied the students on the trip.

“Given that they were only going to have five days on the ground, they needed to be as effective and efficient as possible. The students had to use their wit and knowledge, and the technology that the school provided to set up virtual meetings and collect data about the organizations before they even set foot in Argentina. At Gabelli, we focus on ‘business with impact,’ and these projects helped set expectations very high.”

No spectators, only participants

When MBA candidate Linda Werner, a manufacturing financial controller from Germany, arrived in Argentina with her teammates, they spent two days brainstorming with leaders of the anti-child-abuse organization Red Por La Infancia.

Linda Werner (second from left) and her team meets with a representative from Red Por La Infancia.

The organization, which recently began collaborating with the U.N. human rights education initiative THINK EQUAL, wanted to shift its focus from merely being a refuge for victims to manufacturing products and services that educate children and parents about abuse.

“When we got to the school, there were lots of teachers and a couple of people who were part of the board, but there were only two students,” said Swain, whose team was also tasked with helping the organization to clarify its brand message, update its website, and unify its name across all online platforms. 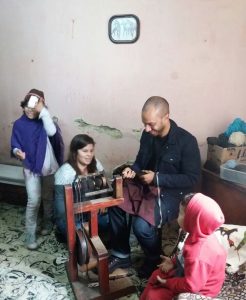 MBA student Dominic Swain, whose team served as consultants to Azul Solidario, spins yarn from sheep’s wool with help from an Argentinian weaver

“When we got to the school, there were lots of teachers and a couple of people who were part of the board, but there were only two students,” said Swain, whose team was also tasked with helping the organization to clarify its brand message, update its website, and unify its name across all online platforms.

After learning that many participants ride horses to school, and often miss days, weeks, and months of classes because of bad weather and muddy roads, the MBA students proposed using technology to combat low attendance.

“I think a lot of nonprofits do amazing work and they need to stay around, but we can’t just think that doing good is a responsibility of nonprofits alone.”

“I was amazed to learn that sometimes we think that making an impact is just a matter of being more effective and efficient,” he said. “Sometimes we don’t realize that there are so many cultural barriers that we might have to overcome before trying to make an impact.”

Cole said that was just one of many lessons Gabelli Launch intended to impart.

“There are no spectators in our MBA program—only participants,” said Cole. “The NGO projects that the students worked on created a point of reflection for them to think, ‘How do I want to build myself as an MBA student?’ That’s fundamentally what an MBA program does. It allows you to re-construe yourself.”
ArgentinabusinessGabelli LaunchGabelli School of BusinessMBANGOnonprofitOn-boarding
Share. Twitter Facebook Google+ Pinterest LinkedIn Tumblr Email