skip to main content
Return to Fordham University
You are at:Home»Business and Economics»New Gabelli School Chair has Focus on Value Investing 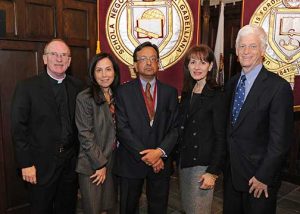 Sris Chatterjee, PhD, professor of finance, was installed as the inaugural Gabelli Chair in Global Security Analysis on Feb. 26 at the Rose Hill campus.

Joseph M. McShane, SJ, president of Fordham, called the event an evening for multiple celebrations. In addition to recognizing Chatterjee’s elevation, the University also announced on Feb. 25 the unification of the undergraduate and graduate business schools as the Gabelli School of Business.

Donna Rapaccioli, PhD, dean of the undergraduate business school, will assume leadership of the unified school. It will be based at Hughes Hall on the Rose Hill campus and in the former Fordham Law School building on the Lincoln Center campus.

“Having a single school led by an extraordinarily capable Dean Donna Rapaccioli will mean a better education for both graduate and undergraduate business students,” said Father McShane. “And putting both schools under the Gabelli name makes Fordham business more recognizable, both nationally and internationally.”

On hand for the installation were Mario Gabelli, GABELLI ’65, chairman and CEO of GAMCO Investors, Inc., and his wife, Regina M. Pitaro, FCRH ’76. Gabelli’s $25 million gift in 2010—the largest in Fordham history—made possible both the new chair and the Gabelli Center for Global Security Analysis, which is focused on value investing. Chatterjee’s research will complement the center’s work.

Gabelli said a top-notch university needs great facilities, students, and professors. By funding a chair in global security analysis, he said he hopes to pass on the opportunity to be inspired the way he was—first as a Fordham undergraduate and then as a Columbia University graduate student under Roger F. Murray, a giant in value investing.

“He was the first [Columbia] professor I had, and to the professors here today I say your influence is forever,” said Gabelli. “Roger put the sun, the moon, and the stars together for me.

Rapaccioli called Chatterjee a consummate researcher and professor in the field of finance. Since joining Fordham in 1989, he has taught at both the undergraduate and graduate levels. He has served as associate dean for graduate business education and as finance area chair, and has also been a valued contributor to the Fordham Wall Street Council.

In his inaugural talk, “The Evolution of Value Investing,” Chatterjee highlighted the emergence of different styles of value investing and the status of current research in this area.

“The arc of evolution is almost a full circle, meaning that the current research that we have enriches and validates exactly what the original thinkers had in mind,” he said.

Benjamin Graham, author of the 1934 book Security Analysis, and his protégées David Dodd, Roger F. Murray, and Bruce Greenwald are the key advancers of value investing, said Chatterjee. The most accurate definition of it, he said, came from an annual 1985 Berkshire Hathaway report by Graham’s best student—Warren Buffett.

“It says that successful investing was the purchase of shares in good businesses when the market price was at a large discount from underlying business value—basically, buying a dollar for 50 cents,” he said.

Chatterjee said there remain disagreements over whether an investor should diversify (Murray and Graham) or concentrate (Buffett) a portfolio. There is little disagreement, however, on rejecting sentiment in decision making and rejecting the efficient market hypothesis, which says that the market has all the information it needs to establish a correct price.

“This is an important distinction,” he said. “In efficient market hypothesis, we are supposed to trust the prices and trust the market. Ben Graham had no trust in the market.

Instead, the core of value investing says “find a good business, invest in that business, and simply don’t look at the market. Hold that investment for 10, 20 years,” said Chatterjee.

Chatterjee said that the public doesn’t appreciate the benefits of value investing to society as a whole. He noted that Graham has bemoaned the public’s loss of confidence in the financial community, especially during times of recession. Academics, on the other hand, have a higher level of confidence, he said.

“My proposition is we make the Gabelli Center for Global Security Analysis a preeminent place for understanding all the subtleties and nuances of the capital market and investing that have come down to us from Graham and Dodd,” he said.