skip to main content
Return to Fordham University
You are at:Home»Business and Economics»New Book Examines Appeal of Professional Golf
Photo by Patrick Verel
As sure as crocuses will poke up through the just-thawed ground in the spring, so too will golf fans cast their gaze to pristine greens, rolling hills, and the “plink” of a driver connecting with a ball.

In a new book, John Fortunato, Ph.D., delves into how the Professional Golf Association (PGA) Tour keeps people tuning in to the sport year after year.  Fortunato, a professor of communications and media management at the Gabelli School of Business, had long explored the business models of sports organizations like Major League Baseball and the National Football League in his classes. But when a student in his sports media course asked him questions about the PGA Tour, he admits, he didn’t have complete answers.

Making the Cut: Life Inside the PGA Tour System (McFarland, 2019) is his way of answering them.

“There are all these dividing lines that are really meaningful in terms of the opportunities that the players get, in terms of their financial prospects. I wanted to capture the human stories that are in this system and make it compelling.” 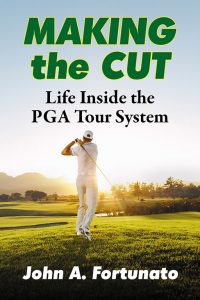 To capture those stories, Fortunato went beyond well-known stars like Tiger Woods and Phil Mickelson, and interviewed up-and-coming golfers like Keith Mitchell. In March, the 27-year-old native of Tennessee won his first PGA tournament, the Honda Classic, held in Palm Beach, Florida. Fortunato interviewed him when he was still just one of the top 25 players on the Web.com Tour, which is a level below the PGA Tour.

At the final hole of the last regular season tournament of the Web.com Tour, Mitchell needed to birdie, or hit one under par, at the final hole to automatically qualify for the PGA Tour. Otherwise, his path to the PGA tour would have to go through the Web.com Tour Playoffs, a series of four more tournaments that would start four days later. At that moment, however, Mitchell was under the impression that he needed to eagle, or hit two under par, to win. When he failed to do that, he thought for sure he’d failed to qualify.

“He actually has a putt to make the PGA Tour, but he already thinks his time is past, and that he didn’t do enough to qualify,” Fortunato said.

“He said to me, ‘all week, I wanted one of two things: A putt to win the tournament, or a putt to make the PGA tour. I had it, and I didn’t even know it, which is just incredible. It was just a miscommunication.’ He was literally tearing up as he learned this.”

As it turned out, Mitchell’s regular season performance on the Web.com Tour was still good enough to qualify him for that tour’s playoffs, and it was there that he redeemed himself by finishing in the top 25 on the prize money list.

That qualified him to play for the PGA Tour, where Mitchell made a 15-foot putt on the final hole of the Honda Classic. He won $1.2 million, qualified for all the major tournaments, like the Masters and U.S. Open, and kept his PGA Tour card for the next two seasons of the PGA Tournament.

“I think there’s these really compelling stories that emerge because of the system, and that’s what I really wanted to document. I wanted to explain the system and story lines that occur because it,” Fortunato said.

The book profiles stories of the likes of Greg Chalmers, who was successful enough to make a career playing golf, but didn’t win his first tournament until his 386th career start, and Joel Dahmen, who overcame testicular cancer to make it onto the PGA Tour.

Drama, Fortunato said, is also built into the way the sport’s winnings are parsed out. As opposed to football and baseball players, who get paid by their teams, golf players compete for cash prizes paid by the tournaments. Every shot can affect their winnings.

“You could find any sport where you could point to one play or one game that really changed it. Where golf is unique is, every stroke and every spot where you finish on the leaderboard of a tournament has a dollar value,” he said.

“So Tom Brady misses a pass on first down? OK, it’s just second and ten. Here, every shot matters.”

What separates the elite golfers from the rest, he said, is their ability to both swing the club, ignore the fact that they just lost, say, $10,000, on a shot that went awry, and stay well under par (typically 70 to 72) for four days in a row.

“Any guy on the tour is talented enough where he  could go out and put up a 64 in one round. But to be able to do it four days in a row, have great rounds, and to do it against the elite of the elite … I have a real new-found appreciation for what these golfers do,” he said.

In addition to getting a better handle on the PGA system, Fortunato said that he’s able to bring what he learned while researching the book into his classes, particularly the ways that sponsorships are negotiated and how the media factor in the sport’s operations.

Above all, he said, a casual sports fan will understand the appeal behind the book.

“There are compelling story lines that attract you. You’re going to see live drama playing out. You’re not going to know the outcome; it’s unscripted,” he said.

“I think that has an appeal for all sports fans. And if you know what the outcomes of those consequences are, I think it makes it more compelling.”