skip to main content
Return to Fordham University
You are at:Home»Business and Economics»Mitra Tapped by Haitian Government as Adviser

As Haiti passes the third anniversary of the earthquake, thousands of nongovernmental organizations (NGOs) have been motivated to help solve Haiti’s many recovery problems, including how to best serve its disabled community. 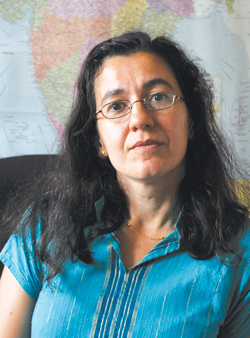 In the face of many disparate initiatives, ultimately it falls upon the central government to develop policy and monitor the activities of NGOs, said Sophie Mitra, Ph.D., associate professor in the Department of Economics and Fordham’s Center for International Policy Studies.

“The earthquake led to injuries and trauma, leading to more physical and mental disabilities,” said Mitra.

In an attempt to address the needs of the disabled, Gerald Oriol, Jr. was appointed Haiti’s secretary of state for the integration of persons with disabilities in 2011. Oriol, who has a disability, promptly set about redefining perceptions and collecting new data on disability via the country’s official census, set to take place later this year.

The secretary has tapped Mitra, a specialist in the economics of disability, to help hone the census questionnaire and advise on policy.

Mitra has advised that language thus far drafted in the census, which before framed disabilities as “impairments,” to be recast as “limitations on functionings.”

She has been involved in the drafting of new questions based on research from the Washington Group on Disability Statistics. A question like “Do you have difficulty seeing, even if wearing glasses?” could be answered with, “No – no difficulty,” “Yes – some difficulty,” “Yes – a lot of difficulty,” or “Cannot do at all.” The more nuanced a survey is, she said, the greater assurance that more than just the extreme cases make it into the record.

Mitra said that disability biases are not limited to Haiti.

“Whether in high- or low-income countries, negative attitudes with respect to what people with disabilities can do are still common. But in high income countries, progress has been made on the physical aspects of integration,” she said.

While cities like New York have highly visible accommodations for persons with disabilities, developing countries have more limited resources to adapt their infrastructure.

“There are the physical aspects of integration and accessibility, but then there are the social attitudes that act as barriers,” said Mitra. “Fighting the biases will affect people’s likelihood of being successful. It needs to be about physical access and social access.”

Mitra’s Haiti experiences will find their way back into Fordham’s classrooms.

“My work so far has been primarily in producing research and this is a good way to show students how research can practically influence policy,” said Mitra.