skip to main content
Return to Fordham University
You are at:Home»Business and Economics»Mapping China’s Growing Influence on the Global Economy

From U.S. President Donald Trump to economists across the globe, many are wondering what China’s push toward becoming the next superpower could mean for the rest of the world. PriceWaterhouseCoopers made a recent projection that China’s economy would surpass the U.S. economy before 2030.

This growing influence was the subject of the Conference on China’s Financial Markets and Growth Rebalancing, held Oct. 2 through Oct. 3 at the Lincoln Center campus and co-sponsored by the Gabelli School of Business.

Keynote speaker Jennifer Carpenter, who is recognized for her groundbreaking research on executive stock options and managerial risk incentives, shared her assessments of the “real value” of China’s stock market— which opened more than two decades ago in Shanghai and Shenzhen and has grown into the world’s second- largest stock market.

“Now China is really ‘required reading’ for any student of sociology and certainly any student of finance,” said Carpenter, an associate professor of finance at New York University’s Stern School of Business.

She noted that China’s stock market is often derided as a “casino” due to speculations of market manipulation and fears that the country may be heading toward a financial crisis. However, her research found that stock prices in China are as informative of future profits as stock prices are in the United States.

“My view is that China is just getting its financial system up to where it needs to be to support a macro economy that is that large and fast growing,” said Carpenter.

Though investors may encounter financial risks related to liquidity and repatriation, Carpenter argued that both Chinese and global investors will likely benefit from China’s decision to open its capital markets.

“In some respects—at least in this context—global investors are having some bargaining power . . . in helping to drive reforms on China’s side,” she said.

The Limits of Autocracy

In his presentation, “The Limits of Autocracy: An Analysis of China’s Renationalization,” Huang provided an overview of how Chinese politicians implement policies in an autocracy. 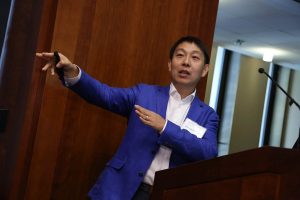 Zhangkai Huang, an associate professor of finance at Tsinghua University, discussed the limits of autocracy. Photo by Michael Dames

With a special focus on the dealings of the Shanghai Group, the Youth League Group, and the Princelings— three major political factions in China’s Communist Party—Huang examined the policy of renationalizing previously privatized firms between 1998 and 2007.

Huang defines renationalization as a policy where local governments repossess private shares. He argued that officials who choose privatization may risk upsetting the ruling autocrats before reaping the benefits.

These distortions, he said, might be responsible for China’s “recent stagnation in our market-oriented reforms and the massive build-up of debt.”

Pace University’s Padma Kadiyala, a discussant, questioned Huang’s assessment. She argued that it is premature to conclude that renationalization is an inefficient policy.

“I think the decision should be examined within the context of the legislative framework,” she said before noting that bank lending policies and bankruptcy rates could provide deeper understandings.

“In the absence of a strong legislative framework, maybe renationalization is the only way out.”

The conference was co-organized by the Bank of Finland Institute for Economies in Transition, and the Global Unit at the City University of Hong Kong.