skip to main content
Return to Fordham University
You are at:Home»Business and Economics»Mad Men, Marketing, and the Archetypal Ideas Man

Once a semester, Linda Luca devotes one of her Integrated Marketing Communications classes to talking about careers in the field. She brings up the TV show Mad Men, which ends its successful seven-season run next week and which, she says, few of her students have ever seen.

“Every semester, maybe five hands have gone up,” said the adjunct professor in the Gabelli School of Business. “But I use the show to identify the characters as archetypes, composites of different people you could relate to in the field in advertising.”

Luca spent more than 30 years working in advertising, retiring in 2010 as an EVP group account director for McCann-Erickson (a real agency that swallows up the fictional Sterling Cooper agency featured on the show). Even though 1980 was a full decade after the Mad Men era, it was still a time when the top echelon was populated with men of the Draper/Sterling ilk, she said. The difference, however, was that ad agencies were becoming increasingly female, with women taking on more of the managerial roles. Luca worked on accounts that included Unilever Foods, Bertolli Foods, Black & Decker, Lowe’s, Chase Bank, Cadbury Adams, MLB and Powerade (a sports drink offshoot of Coca Cola.) 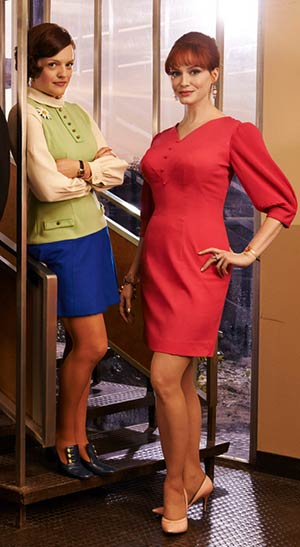 As a historical account, Luca said the megahit show is ending on the cusp of an era that marked the diminishment of the small independent agency. Through the 1970s, agencies like Sterling Cooper were gobbled up by big agencies (like McCann-Erickson), leaving independent creative types like Don Draper – a big fish in a little pond– drowning in a pool of other idea men as talented as they.

“The characters on Mad Men—Don, Roger, Peggy, Joan—feel like they’ve lost their souls,” said Luca of this final season. “Now they are joining this behemoth. They’re stripped of the independence they once had and Don finds himself in a meeting with a dozen other creatives and asks, ‘What am I doing here?’”

Before one feels sympathy for Don Draper’s existential isolation, however, Luca points out that these professionals made a fortune from their buyouts; they became millionaires. Such larger agencies offered money. And opportunity, she said.

Luca said by 1980 women no longer had the challenge faced by Mad Men’s Peggy Olson, the shy secretary who transformed over seven seasons into an assertive, creative copy chief (and tough-talking single female) withstanding the male-dominated tide of ideas.

“The bosses I worked for at McCann were Peggy a decade later,” she said.

Mad Men represents a time when being an ad man meant creative freedom, and the new medium of television was reinventing product marketing in a booming economy. Much has changed in 50, even 40 years, said Luca, and the archetypes are for the most part redefined—Joan, the voluptuous redhead trapped in her own body, is gone, as women’s smarts now rule the day; Pete Campbell, the shady double-crossing account manager, has been diminished in a new era of ethics in business.

But the need still exists in marketing for the Don Drapers, she said, listing qualities that translate into success for students who aspire to work in the field: high energy, enthusiasm, strong social stills, creativity, and having integrity of an idea—a vision.

“Don Draper has this brilliance,” she said. “In advertising, you still have to have it today. That is still your ticket.”

(For more on the success of shows like Mad Men, see Fordham Magazine’s in-depth look at TV’s new golden age.)