skip to main content
Return to Fordham University
You are at:Home»Business and Economics»Live Blogging: Hurricane Sandy as Inspiration for a ‘New’ New York 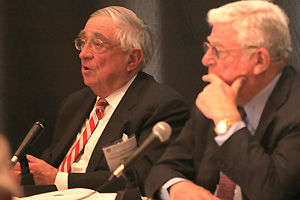 Richard Ravitch, former lieutenant governor of the State of New York, andJohn E. Zuccotti, chairman of Brookfield Properties, ended the conference on an up note. Both men cited the two recoveries underway,  both 9/11 and Sandy, as examples of the city’s resilience.

Ravitch called New York City an “unbelievably desirable place to live” that is relatively “tax efficient.” He added that the demand for New York real estate will remain strong.

Zuccotti agreed, but expressed concerns for affordable housing for the next generations’ workforce. He said that Chicago and L.A. are no longer the city’s competition, whereas London, Frankfort, Singapore, and Hong Kong are.

“We have to be sure that nostalgia is a kind of comfort, but it can also be a kind of poison, which could be subjected to selected memory,” warned Gautschi.

“We learn by example that cities, too, can die,” he said. “Let’s resolve that this wonderful icon of New York, that means so much to so many, from Paris, to Shanghai, to Kansas City, let’s keep it alive.”

A panel titled “In the Eye of the Storm: Meeting the Challenges of Sandy” featured Carter Strickland, the city’s commissioner of New York City Department of Environmental Protection, and Christopher Levendos, executive director of national operations for Verizon, one of the event’s sponsors.

Strickland laid out the damages of to the city’s water supply and waste water systems. He reminded the crowd that as the much of the city’s water comes from outside city boundaries, NYCDEP had to make monitor 200,000 square miles of watershed land as well.

As the tidal surge essentially traveled up the Hudson river, much of the waste water plants on the river sat in harms way. Nevertheless, NYCDEC employees managed eight million gallons of waste water during the storm, which otherwise would’ve gone into the harbor.

In a riveting account about the damage sustained by Verizon’s headquarters on West Street, Levendos told of flooding in five subbasements which act as an important network hub for communications to much of the city.

“The water didn’t come in in a trickle it came in in a roar,” he said.

In the weeks that followed the roar of water coming in was replaced with the roar of the pumps taking it out. He said the biggest challenge was replacing the fiber optics infrastructure. Much of the equipment in lower Manhattan today has been manufactured over the past 4 months. 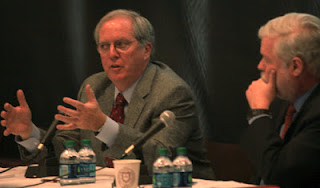 Foye addressed an audience that included his predecessor, former Port Authority head Chris Ward. He told them something that many already knew: the storm was the worst transportation disaster that the country had ever seen. He warned that in rebuilding, the city, state, and federal governments should heed the advice given to cadets at West Point: Don’t be like the generals who were always fighting the last war.

The region, Foye said, needs to look beyond Sandy, and not think of it as the worst-case scenario, but as the minimum of what should be prepared for. Burke concurred, but said there are limits to what the city can prepare for, noting that a tsunami would put Lowenstein’s 12th-floor Lounge/Corrigan Conference Center under water, and that is an event that “would be beyond our control.”

One trope that emerged from the conversation was a comparison between 9/11 and Sandy. Burke said that for Con-ed the 9/11 disaster was comparatively limited in scope.

“It was localized,” he said. “We ran cables right on the street, but in Sandy we lost over a million customers.”

Foye said new threats are emerging that must be considered in tandem with other potential disasters, such as cyber attacks. While Sandy may call to mind damage to the physical infrastructure, he suggested a holistic approach should consider all threats, including cyber, that could effect transportation systems and the electrical grid as well.

“Yeserday’s Bulgarian math major is now a state actor,” he said, as Burke nodded in agreement. 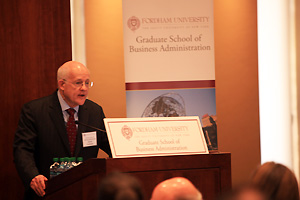 Joseph M. McShane, S.J., president of Fordham, launched the Graduate School of Business Administration’s (GBA) Business and the City seminar series this morning, March 5. Sponsored in part by Verizon, “Hurricane Sandy as Inspiration for a ‘New’ New York” looks at designing, building, and funding infrastructure in the post-Sandy metropolis.

“Let us prove that we are doers who meet challenges,” Father McShane told the audience of New York business leaders and urbanists.

Father McShane was followed by David Gautschi, Ph.D., dean of GBA. Gautschi evoked Charles Dickens saying this moment in history could be New York’s tale of two cities: “that of our collective memory and that of how we envision it.”

“This is a thesis conference,” he said.

He added that GBA is committed to picking up the seminar series this fall when it will draw on students from across the university in an attempt to find “common themes and common truths.”

If this conference represented the established point of view, the following conferences would represent “anti-thesis” points of view.

Mike Wallace, Pulitzer Prize-winning co-author of “Gotham: A History of New York City to 1898” then took the opportunity to frame the conversation within the city’s history, telling the crowd  New York rebuilders have “winds of history at their backs.”

“There will no doubt be a naysayers,” said Wallace, but he said that even as he spoke the city’s massive water tunnel project is making tremendous strides “underneath our feet.”

The project is, he said, one of the few times the overused term “awesome” is entirely appropriate.
–>
Follow on Twitter w/ @fordhamnotes & @GBAFordham #bizNYC. Follow the livestream at bit.ly/YauACI