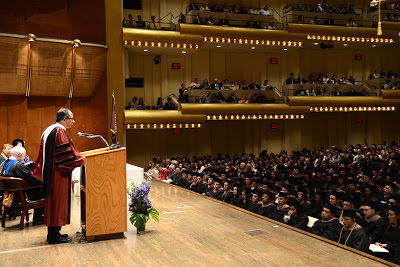 Basu delivers the commencement address to GBA’s Class of 2013.

Kaushik Basu, Ph.D., chief economist and senior vice president for development economics at the World Bank, received a doctorate of humane letters, honoris causa, and gave the keynote address at the diploma ceremony for the Graduate School of Business Administration, held Sunday, May 19, at Avery Fisher Hall.

A Paean to Reason and Empathy

I want to begin by expressing my deepest gratitude to Fordham University for the invitation to give this year’s commencement address and for conferring on me the Doctorate of Humane Letters, honoris causa. Being an academic and a researcher, I cannot deny that few honors match the satisfaction that comes from getting recognition from one of the leading universities of America. Thank you, Fordham.

An invitation to give a commencement address is a carte blanche to the speaker to inflict unasked for advice on graduating students. A nobler person may have resisted the opportunity. I will not. This also means there will be collateral damage on unsuspecting faculty and family who may have gathered in the auditorium. But to deflect the charge that I am inflicting this speech on others’ family, I have brought along with me to this event not only my children, daughter-in-law and wife, but also my mother-in-law. So, in case you too have brought your mother-in-law to the commencement and she complains, you now have a line of defense.

Dear graduating students, congratulations. You are about to go out into a big, wide, exciting world. There will be trials and tribulations. There will be periods of elation and also days of feeling down and low. On such days try to remember that life is full of uncertainty and that this cuts both ways.

I did my schooling at St. Xavier’s in Calcutta (now called Kolkata); then I went to St. Stephen’s College in Delhi for my undergraduate degree. Those were blissful years when I managed to delude my parents into believing I was studying. I moved on, geographically, subsequently but consider myself to have remain firmly rooted in the fraternity of St. Xavier’s and St. Stephen’s.

My academic interests were kindled in London, where I went for graduate studies. In 1975, soon after starting my PhD at the London School of Economics, I applied for the Young Professionals Program at the World Bank. I was delighted to be short-listed and flew to Paris for the final interview. There was great excitement among my friends and family. I did not get the job. What I did not know then was that this was one of the luckiest breaks in my life. I turned to research and discovered a passion which I had not realized I had in me. That is what I mean by uncertainty cutting both ways.

The lure of research, I have to admit, has little to do with the desire to do good and help society. It is driven mainly by an urge to aesthetics and pursuit of beauty in nature. For the researcher, research is an end in itself, akin to the creation of music or art. The benefit to society can be large but it is usually a by-product of this creative urge.

In my case, when nearly four years ago, I went into policy-making that was an act of sacrifice; I had to tear myself away from research and my total absorption with deductive reasoning to trying to make a contribution to the world around me. Though I did go into it in a spirit of deliberately trying to do good, telling myself “enough of self-indulgence”, in its own way the life of a policymaker has turned out to be fulfilling.

Drawing on my own experience let me give you, graduating students, some advice. I want to talk to you, in particular, about the art of reason and the importance of compassion.

One faculty we all possess and is the most under-utilized of human faculties is reason. Any good economist will tell you that good policy must be evidence-based. This message has now sunk in. All treasuries, ministries of finance, central banks and important international organizations have legions of researchers who collate data, and dissect and analyze them. Where we have deficiency, however, is in the use of reason—plain deductive reasoning. I believe there are huge gains to be made if our decision-making is not just evidence-based but also reason-based—more so than has been the case thus far. Moreover, this is true not just for national level policymaking but in the conduct of our personal lives.

Reasoning is a strange skill. Truths uncovered by reason have a magical quality. Pythagoras did not hit upon the theorem named after him by collecting evidence on right-angled triangles from around the world, but through pure thought. Bertrand Russell had once remarked that mathematics is a profession where you cannot tell apart a person at work and a person asleep. This is true for all kinds of deductive reasoning. And unlike mathematics, deductive reasoning is an art available to all. We must simply learn to hone this skill to think and use it well.

People in search of happiness read self-help books, seek counseling, practice meditation, and get medication. What they do not use adequately to battle the blues is the power of reasoning. Reason can’t solve all your problems but it can play a large mitigating role.

The first rule of reason is honesty. There are situations in life where kindness and concern for others make us hold back on certain kinds of speech. That is as it should be. Speech can hurt as much as physical violence. If the latter is wrong, so must be the former. But to ourselves, in our minds, we should practice the utmost honesty. Honesty in thought may be inconvenient but in the long-run it helps.

Consider what we are often told—that if there is a will, there is a way; with sufficient determination, we can achieve anything. But to believe in this you have to suspend reason. And my advice is don’t. There are things in life which through sufficient determination you can achieve; but there are also things which no matter how hard you try, you will never get. It is best to see this clearly and realistically and then make your own choices rationally. You will make better decisions.

Second, it is important to be modest about our knowledge and to know how little we know. There have been prominent philosophers in history, from Pyrrho of Elis some 300 years B.C., through Sextus Empiricus in the second century A.D. to David Hume in the 18th century, who have been skeptics in the sense of being deeply aware of the frailty of human understanding. There are important traditions in oriental thought that belong to the same tradition. The ancient Indian philosophy of maya and some early Chinese poetry capture this exceedingly well. Here is a famous poem from the 3rd century BC, attributed to the philosopher Chuang Tzu: “Once upon a time I dreamt I was a butterfly. Then I awoke. And now I do not know if I am a man dreaming I am a butterfly or a butterfly that has fallen asleep and dreaming I am a man.”

I would not recommend that you take this philosophy to the extremity to which some of these philosophers did. Pyrrho, it is believed, walked past a fellow Greek philosopher who had fallen into a ditch, without making any attempt to rescue him; and later explained that he could not be sure that the philosopher would be better off outside the ditch than in it.

Do not take skepticism to such extremes. But practiced in moderation, it can actually be liberating. To be aware that what we see with our naked eyes can be illusory stands to reason and can be a source of calm.

Third, when you get angry and upset with someone, in your personal or professional life, try to understand that people are products of their history, life experience, and environment. Once you learn to reason about the causes of human behavior, this will come naturally. This is not incompatible with taking steps to stop people from acting or speaking in certain ways. You can have distaste for certain actions but not for the actor. And let me assure you that to learn this art is to take a big load off your shoulder.

The art of empathy and compassion is related to a well-known axiom of welfare economics. This is called the principle of anonymity and refers to the need to treat individuals with the same respect, irrespective of their name, race, ethnicity. It asks us, when dealing with people, to pause and think “if I were you.” The principle of anonymity has been used by prominent philosophers, like Immanuel Kant. But I can do no better than to introduce you to this idea by quoting someone who, in my opinion, is the greatest living economist in the world, Kenneth Arrow. Arrow had quoted the epitaph of Martin Engelbrod to explain this principle.

Rooted in the same principle is Gandhi’s famous advice. When in a dilemma about which action to take, think of the poorest and saddest individual you have known—nothing else about that person matters—and do what will be better for that person.

Compassion and empathy do not have any contradictions with reason and have reach beyond. This principle of empathy—being able to understand and reach out to people who look different from you—can make the world a better place. And this should not be a difficult art. Once we look a little deeper, beyond our superficial differences, it becomes evident that we human beings have similarities that transcend race, religion and ethnicity. This is no surprise because we all share the same genetic roots, from the people who set out from Africa some 70,000 years ago and settled all over the earth. I know it sounds sentimental and moralistic but it is true, that for one group to turn against another is for siblings to turn against siblings. There should be no place for that.

And if that is not persuasion enough, there is a selfish reason for compassion. Curiously, compassion can be empowering. It enables us to deal better with other people and so ends up being a source of our own strength, joy and, in the end, happiness. Whether you become an academic, the CEO of a corporation or a stock trader, do not abandon empathy for those with whom you interact.

I have gone on for a while, giving you reasons for greater happiness in life. I will not prolong this further because of one last reason—giving too many reasons can be self-defeating. They can nullify one another. An old tale illustrates this well. A man charged in court with inflicting violence decided to persuade the jury with a profusion of reasons. So he argued, “Here are three reasons why I should be acquitted. First, I was out of town on the day of my alleged crime. Second, my religion prohibits the use of any form of violence. And, third, he hit me first.”

On that note I draw my lecture to a close. Thank you.