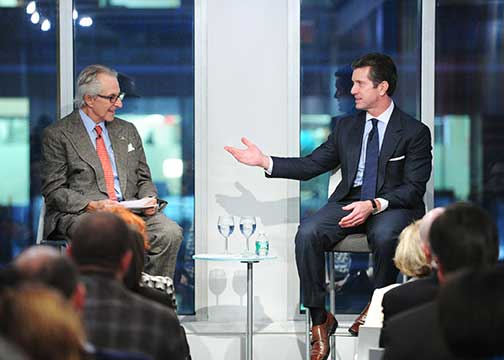 Sander Flaum and Alex Gorsky chatted about everything from innovation in healthcare to how staying an active learner makes one a great leader. Photo by Chris Taggart

Alex Gorsky, chairman and CEO of Johnson & Johnson, held forth on everything from his biggest failure to how he maintains a work/life balance, in a conversation on Oct. 30 with Sander Flaum, CEO of Flaum Navigators.

The gathering, which was held at the Midtown headquarters of Steelcase, was part of the Fordham Graduate School of Business’ Flaum Leadership Lecture Series. Flaum is an adjunct professor in the Schools of Business.

Gorsky, who leads a corporation with 250 subsidiary companies with operations in over 57 countries in 2012, told a sold-out crowd of business students, alumni, and friends that maintaining a healthy work/life balance is key to being a great leader—for two reasons.

“A mistake that I made was trying to be a perfect leader, because there is no such thing, and in fact, people today want an authentic leader. They want someone they can identify with.”

Taking care of oneself physically is also critical, he said, lest one suffer from health problems after a 35-year career and be unable to enjoy retirement and family.

“There’s a lot of rubber chicken dinners, there’s a lot of long hours, and what I find is, if I don’t carve out a certain time of my day to re-energize, then I’m not as good at a time that I need to be.”

Allowing that one learns more from failure than from success, Gorsky singled out his biggest failure as his decision to leave Johnson & Johnson after 16 years in 2004.

He said he’d hit a point where he did not feel aligned with the person he was working for—a double disappointment because he’d moved his family to Europe for the job. What he eventually realized was that, like the U.S. Army where he served for six years, Johnson & Johnson is a values-based organization where one can feel they’re serving for a higher purpose.

Gorsky rejoined Johnson & Johnson in 2008, but not first without learning a critical management lesson. During his hiatus he worked for someone who was very busy and whose English was not perfect. He was, however, a master of the “two-minute conversation.” Gorsky said he never went more than three days without getting a call from his boss, who would ask him about the most important thing he was working on and what his biggest concern was.

“What I found was, communication in a relationship is a little like a bank account. Frequent ongoing deposits over time build up a significant savings for you,” he said.

“It’s waking up and being frustrated that the coffee’s not the same. It’s having to use the health care system. It’s having to try to learn the local language,” he said.

“I think it’s going to make you not only a more global executive, but a more global person. It’ll change the way you think. The way the world is interconnected today, if you don’t, you’re not going to realize your full potential.”