skip to main content
Return to Fordham University
You are at:Home»Business and Economics»Inside the Executives Studio

Fordham took a page from James Lipton’s book when a panel of four distinguished alumni shared their thoughts on life and success—Inside the Actors Studio style. 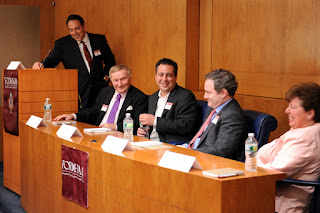 Like Lipton, moderator Vince Cappucci, GSB ’81, LAW ’84, came prepared with a stack of questions on index cards for the Young Alumni Spring Executive Leadership Series event, held May 2 at Banco Santander in Manhattan.

“Don’t worry, I’m not going to ask you what your favorite curse words are,” Cappucci told the panelists, referencing one of the Bravo show’s famous 10 questions. But he did prompt them to share their tips for success during an evening of easy laughs, anecdotes, and career advice.

Cable TV pioneer Herb Granath, FCRH ’54, GSAS ’55, chairman emeritus of ESPN, said successful people all seem to have a certain restlessness. “Most are peripatetic; they don’t sleep at night,” he said. “But God bless them for it, because they are the ones that ask the questions that make the next important thing happen.”

Granath was a physics major at Fordham who took a job working nights as an NBC page to help put himself through school. After four years of working in television, he said, when graduation came around, “physics seemed a little dull.”

Granath said almost everyone he knows can point to one or two things—like that page job—that changed their lives.

“You have to be prepared to recognize an opportunity and have the ability to take advantage of it,” he said.

Karen Parrish, FCRH ’82, a vice president at IBM, agreed that young people should be open to the unexpected in their careers.

“I don’t think you can have a long-range plan,” said Parrish, a leader in the multinational corporation’s public service industry solutions division. When she first started at the company, the career path to certain executive positions was literally typed up and handed out to employees. Now, with so many different avenues to pursue, she said, “Why would you want to plan it?

“The key is to have some sense of what you love and to be able to take some risks.”

In a direct nod to Inside the Actors Studio, Cappucci asked the panelists what their least favorite word was. The results were unsurprising.

And Sanchez, as an executive at one of the world’s largest banks, drew the biggest laugh with his response: “Bankruptcy.”

A lively Q&A session followed the panel discussion. Young alumni and a few current students asked the panelists about topics ranging from mentors to doing business in China.

Guest Sara Kugel, FCRH ’11, an associate producer at CBS Sunday Morning, said Young Alumni events like this benefit everyone, “even if you have your dream job.” Networking is crucial, said the former WFUV student reporter, adding that Fitzgerald gave her her first job out of college. “You have to plant the seeds before you need the fruit.”