skip to main content
Return to Fordham University
You are at:Home»Business and Economics»In High-Context Communication, It’s Not Always What You Say 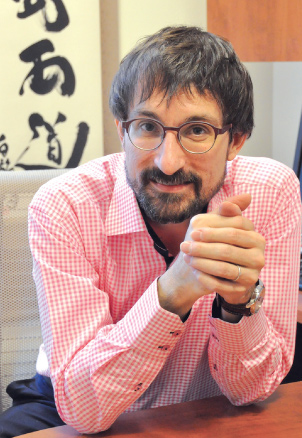 You can learn a thing or two about management from martial arts.
Benjamin Cole, Ph.D., assistant professor of management systems in the Fordham Schools of Business, spent nine years in Japan, and the time he spent training at a martial arts dojo there proved to be ideal for examining the importance of successful communication within organizations.

“Lessons from a Martial Arts Dojo: A Prolonged Process Model of High-Context Communication,” which Cole presented at the Academy of Management conference in August, was recently accepted for publication in a special issue on “West Meets East” in the prestigious Academy of Management Journal.

The paper was also named a finalist for two international research awards at the August conference—the Gustavson Best Qualitative Paper Award and the Douglas Nigh Award for the Best Interdisciplinary Paper authored by Junior Scholar(s), both sponsored by the International Management Division of the Academy of Management, the world’s largest association for researchers on organizations and management.

Cole says that Western business managers would do well to appreciate, as the Japanese and Chinese do, that the context in which you say something is often as important as the content of what you say.

Paying close attention to context at the dojo where Cole trained was particularly instructive, he said, because it showed the paramount importance of “shared understandings” as a prerequisite for successful communication.

While training at the dojo, Cole came to know a fellow Westerner, Ringo, who, like him, had spent many years practicing martial arts in Japan. Whenever Ringo showed up for class, he preferred to practice a more aggressive and dangerous style of martial arts, which ran contrary to the teachings of dojo’s grandmaster and which was not generally practiced there.
Rather than admonish Ringo directly, however, the grandmaster changed his instruction whenever Ringo was present for a class (which was approximately every other week). On those weeks, the dojo switched to teaching distancing and evasion practices that involved no laying of hands on others.

Ringo’s mistake was ignoring the shared understanding among practitioners that, whenever a student misses a class, he or she follows up with classmates on what was practiced the week before. Had Ringo done this, he would have likely figured out that the grandmaster was attempting to subtly communicate to him that his more aggressive style of practice was unacceptable.

“In Asian cultures, there’s a real emphasis placed on the recipient of the information figuring things out for him- or herself,” Cole said. “The communicator will speak around and around the subject, so it falls on other individuals to understand what the communicator is saying.”

The fact that people from different cultures place different degrees of emphasis on context is widely known. For example, a guest at a dinner in Beijing is expected to refuse a host’s first offer to sit facing the door, the seat reserved for the guest of honor. Were a guest to do the same thing at a dinner in Nashville, however, it could be considered rude.

Cole says that, regardless of whether one is from Japan, Germany, the United States, or elsewhere, individuals can actively control how much they pay attention to context.

“The challenge comes with reading people and understanding there are complexities in what’s in the shared understanding and what’s not. You may be reading into every interaction you’re having, but sometimes the word choices that are being made are meant to communicate to other people,” he said.

“It’s very hard to learn, but once you become attuned to it, you can actually become a better leader, because you’re concerned with putting out small fires before they become large blazes.”

Shared understandings are valuable in countless situations, said Cole. He has also examined their role in the nuclear energy industry, which must be profitable while working with an extremely thin margin of error, and thus requires employees who have an extreme level of mindfulness. Another place in which context is extremely important is a surgical ward.

In the case of the nuclear industry, Cole and his coauthors looked at the effects of outsourcing, based on data gathered from approximately 85 percent of all plants in the United States. Bringing in outsiders had a negative effect on both plant productivity and employee safety.

“When you bring in these outsiders, there’s still this border, because they come from another organization. And that border impedes mindfulness because it prevents the sharing of information between people who should be getting along,” he said.

“Our paper shows that both in terms of reliability of performance and in terms of employee safety, when you introduce these strangers to the organization, you increase the probability of failure.”

By paying closer attention to the context in which others are communicating information, Cole hopes people will miss fewer signs of trouble in a company.

“It’s about becoming mindful about how people understand information, and you can become a much better manager as a result,” he said.