skip to main content
Return to Fordham University
You are at:Home»Business and Economics»How Do Companies Really Know Their Customers Are Satisfied? 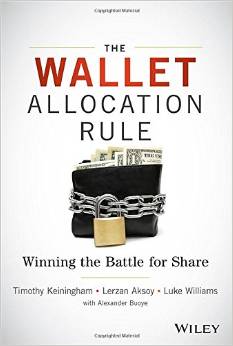 Every year, companies spend billions of dollars measuring customer satisfaction in the hopes of finding the key to improving customer loyalty. According to Fordham professor Lerzan Aksoy, though, these companies fail to see what actually signals whether they are winning customers’ favor.

In their new book, Aksoy and co-author Tim Keiningham, global chief strategy officer at Ipsos Loyalty, argue that many companies overlook an important gauge in customer satisfaction: the share of customers’ spending in the company. Grounded in new, rigorously-tested strategies coming out of Harvard Business and MIT Sloan School of Management, The Wallet Allocation Rule: Winning the Battle for Share (Wiley, 2015) represents an “unabashed challenge” to current customer experience management.

“We have been working on the topic of loyalty for over 15 years,” said Aksoy, a professor of marketing. “During this time we have come across lots of companies complaining about investments in making customers happier, but not necessarily paying off.”

With this conundrum as their starting point, Aksoy and Keiningham began to investigate why companies’ efforts to improve customer satisfaction or to get customers to recommend their company to others didn’t translate into market share growth. They found that most companies’ focus is far too narrow.

“The way companies go about determining what to focus on is wrong,” Aksoy said. “They focus on what makes customers happy with the company, but don’t necessarily understand—or measure—whether the same customer also shops with competitors and why. It’s really as simple as that. [The book] offers a way to determine this.”

The pair recommends in The Wallet Allocation Rule that companies shift their focus from what creates satisfied customers to why customers buy from them and their competitors. Understanding that “why” helps companies not only determine where they rank relative to their competitors in the mind of the consumer, but ultimately grow their market share.

Aksoy and Keiningham will be present for a book launch tonight at Fordham’s Lincoln Center campus. The book comes out Feb. 9.