skip to main content
Return to Fordham University
You are at:Home»Business and Economics»Heidi Miller’s Ten Rules to Live and Work By 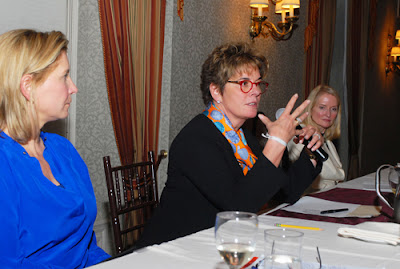 The event, sponsored by the Graduate School of Business Administration, took on a more casual tone than some of the council’s previous events, which often veered deep into policy or theory. Not that the participants weren’t well versed, they simply weren’t there to talk about that. Etherington said she’s usually called on to talk about CAT bonds, not glass ceilings.

The room overlooking Central Park at the New York Athletic Club, once an oak-paneled bastion of male dominance, was filled with to near capacity with women.

None of the panelists started with a leg up in the finance industry. Both Etherington and Ellsworth talked of humble beginnings, with both their fathers on the police force. Etherington taught French in small town in Idaho, while Miller began her career with a doctorate in history from Yale.

“The question I’m often asked is ‘How does someone with a Ph.D. in history become the CFO of what was then the largest bank in the United States,'” she said. “I’ve always found that question somewhat puzzling, as I myself have described my career as inadvertent, meandering, and spontaneous.”

Miller said that if such an answer doesn’t satiate audiences looking for something a bit more concrete, she could offer up “Heidi’s Top Rules to Live and Work By.” Advice, she said, that could be taken regardless of gender…

1. Only work for people that you respect.
“You don’t have to like them or have dinner with them, but you do have to respect them… Bad bosses are to be avoided at all costs… Insecurity in a boss means that their only desire is to shine only themselves and consequently they won’t give you the opportunity to shine independently.”

2. Take jobs that are enjoyable, not just the one where you think you need to learn something.
“Sometimes someone is great at marketing and they think they better learn finance, and then get stuck in those finance jobs and fail…  I benefited from being in areas that were less sexy than others. It was in those marginal areas that people didn’t flock to that gave me an opportunity to do more than someone at my level might have in another area. I remember when I went into emerging markets everybody was into leverage buyouts. Leverage buyouts were crowded with every alpha male in the bank. But as a consequence I was able to take on roles that were well beyond my qualifications at that moment.”

4. Work with supervisors to clearly define your job, how your success will be measured, and where it will land you.
“Take control of these

0%
conversations, no boss likes to give these. People in business who are successful are not trained at all to be managers, and so they avoid these conversations. You can’t have these ambiguous conversations where you walk away thinking you had this glowing review when in fact what they really wanted to say is, ‘You’re fired.’ You have to make it easy to have those conversations and you deserve to have that knowledge.”

5. Be prepared to work somewhere else; loyalty only goes so far.
“In this day and age of creative destruction, many people get laid off. Be prepared… Don’t wait too long, because sometimes waiting too long makes you stale.”

6. Cultivate your network.
“Collect business cards. Even if you’re not searching for a job, find out what they do. Ask them what makes them successful in their jobs. These are conversations that people love to have, they love to talk about what they do. This becomes part of your network. I don’t care if that takes ten or twenty years, that network will hold you in good stead… Stay in touch and build your organic network.”

7. Take risk.
“Sometimes a woman who applies for a job will have a resume that has 90 percent of the experience needed to qualify for that job, but the conversation will focus on the 10 percent that disqualifies them. Women are reluctant to jump that experience gap and claim they can do it. A guy comes in and his resume is just the reverse, and spends that time in the interview and sells the gap.”

8. Set your limits and articulate them clearly to your boss and yourself.
“Burnout is real. We have limits; we have families, and community interests. If we deny these other interests in our lives, we often get resentful and reach a point where we can’t do the job.”

9. Find your own style, your own voice, and your own authenticity.
“You have to do it your way. If you’re looking and reading every book and trying to figure out ‘What’s the way I have to look in order to be successful?’ Well, if it’s not comfortable, it’s not going to be right.”

In a separate and final piece of advice for women, Miller quoted former Secretary of State Madeleine Albright, who said, “There is a special place in hell for women who don’t help women.”