skip to main content
Return to Fordham University
You are at:Home»Business and Economics»Going Global at GBA 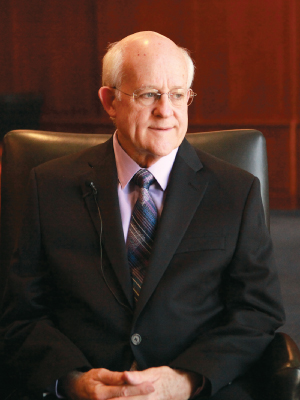 On Sept. 23, David Gautschi, Ph.D., dean of the Graduate School of Business Administration (GBA) took to the podium and introduced William Dudley, president and CEO of the Federal Reserve Bank of New York. A bank of TV cameras lined the back of the room as a dozen journalists tapped away on their laptops.

Although this was not a typical morning for Gautschi, neither was the Fed CEO’s visit an isolated incident: The star wattage of guest speakers at GBA has brightened considerably, including visits by Port Authority Executive Director Patrick Foye, FCRH ’78, LAW ’81, and Con Ed CEO Kevin Burke, LAW ’71, who sat on a panel last March.

On Oct. 15, former New York City Department of Education chief Joel Klein sat down for a discussion with Joseph M. McShane, S.J., president of Fordham, as part of the Business in the City symposium that Gautschi launched last spring. Former Reagan budget director David Stockman discussed his recent book, The Great Deformation, at the Wall Street Council lecture on Oct. 22.

The high-profile visitors are just one part of a larger paradigm shift that Gautschi was looking to create when he came to Fordham in 2010 from the Lally School of Management and Technology at Rensselaer Polytechnic Institute (RPI) in Troy, N.Y., where he served as dean and professor of marketing and business economics.

Born into an Air Force family, Gautschi said the place he most identified as home was the state of Maine, where he spent his high school years and met his wife. After serving in the U.S. Marine Corps, he pursued an M.B.A., though he still hedged his bets with math by focusing on quantitative methods, which eventually led to studying modeling and applied economics at the University of California at Berkeley, where he earned his doctorate. Throughout, Gautschi never took a course on marketing. Yet, his first job after Berkeley was teaching marketing at Cornell.

Gautschi seems well aware of the irony inherent in learning by teaching. But it illustrates his underlying rationale that adaptability is key to both teaching business courses and running a business. He described his eventual shift from academia to business, and back again, as analogous to the balance struck by business schools—maintaining one foot in the academy and another in the private sector.

Gautschi’s career took root in France, where he developed three successful businesses while teaching at INSEAD. For one business he used computer modeling to develop a decision-support system for clients—pre-Excel tools intended to help them with pricing, forecasting, and advertising. He offered clients a simulation intended to show them how the product performed in the real world, and the clients raved about the simulation, preferring it to the product Gautschi was actually trying to sell.

It was, he said, his first real lesson in business and marketing, and he responded accordingly: he made the simulation the product.

“The way the model worked was that it allowed people to see the whole picture of their business and to quasi-respond,” he said. “But models are inherently wrong because they’re abstractions of reality.”

“The best leaders need to be good abstract thinkers because the business environment is constantly in flux,” he said.

It is for this reason that Gautschi says business school professors need to avoid being “too prescriptive.” He noted that many faculty in business schools haven’t been in business and can therefore provide students the objective perspective of someone who is not emotionally attached to the subject—a perspective they’ll need in the future.

“We have to remember that we’re preparing students to go out and participate in a future that we’re not participating in,” he said. “They’ll experience things we’ve never faced and they’ll have to figure it out.”

Gautschi believes there are two roles that a business school must play: the practical and the theoretical. He stressed that GBA is a graduate school, not simply a professional school.

“I don’t think that universities have ever come to grips with studying business as a part of the academy,” he said. “Yet you don’t go to an art historian to instruct someone how to paint.”

He said that running a business is different from studying the phenomenon of business. Preparing students “to go out there and do it puts business schools squarely in the realm of a professional school,” but a graduate school provides a broader education alongside practical application.

In addition to providing perspective through a broad-based curriculum, Gautschi has pursued an overhaul of the student body and faculty that mimics the globalization of the business world. At the moment 720 of GBA’s approximately 1,765 students come from abroad, representing 43 different countries.

The cohort of international students, and indeed GBA’s international faculty, gives American students a basis on which to understand globalization.

“After graduation they’ll be interacting with each other whether they want to or not,” he said. “It would be irresponsible as a business school not to reflect what’s going on in the business world.”