skip to main content
Return to Fordham University
You are at:Home»Business and Economics»GBA Welcomes Families from Around Globe for Graduation 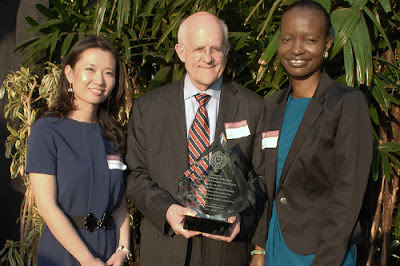 There was an array of countries represented when the Fordham International Students Association (FISA) of the Graduate School of Business Administration (GBA) gathered on the rooftop garden at the Empire Hotel on May 16. Students from Zambia mingled with others from Saudi Arabia and China.

Outgoing FISA president Clare Mwange Mukolwe, who is from Zambia, welcomed the families of graduating GBA students, many of whom traveled thousands of miles to come to New York for commencement.

A few of the students drew stark comparisons to their home countries’ manner of educating business students.

Hind Al Bakri said that as a woman in Saudi Arabia, she had to sit behind a screen during class lectures. Being able to talk to her Fordham professors face-to-face was a new experience.

Others drew distinctions in regional business styles. Eric Li said New Yorkers are a bit more aggressive in business than the Chinese, though he added that traditional Chinese humbleness seems to be morphing into a more international assertiveness, a notion that Kelsey Qianqian Si agreed with.

Quinqian Si, a native of Shanghai, is FISA’s incoming president. Chinese nationals like her represent 30 percent of the GBA’s incoming class of 1764 students. It’s a distinction that Dean Gautschi drew attention to in his welcoming remarks.

“We see China as a friendly place,” he said, before adding that fostering an international profile will be key to GBA’s future. He noted regions of the world that the school is focusing on include China, the Indian Subcontinent, sub-Saharan Africa, Turkey, Europe, and the Middle East.

Mukolwe said that once the international mix comes together at Fordham, it looks a lot like New York City. She added that even within the club’s Chinese majority, the differences are not nuanced, but are quite distinct with China’s regional differences adding to the overall diversity.

“It’s not a melting pot, it’s more like a tossed salad, we bring all of our cultures together and everybody contributes to the taste,” she said.