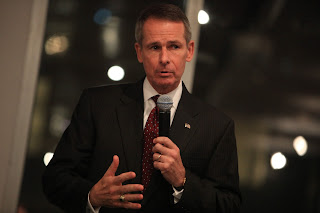 Gen. Pace was appointed the 16th Chairman of the U.S. Joint Chiefs of Staff, the highest-ranking military officer in the U.S. armed forces, in 2005.

He retired from active duty in 2007, after more than 40 years of service in the United States Marine Corps, and in 2008, he was awarded the Presidential Medal of Freedom, the highest civilian honor a President can bestow.
He currently serves on the Boards of Directors of several corporations involved in management consulting, private equity, and IT security. At the Graduate School of Business, he has lectured on topics such as leadership, “Lessons from the War in Iraq” and “Cyberterrorism: Implications for Financial Markets.”
His lecture next week will be “Leadership Biases.” A reception will immediately follow.
Tuesaday, Sept. 24
6 p.m.
12th-Floor Lounge | E. Gerald Corrigan Conference Center, Lincoln Center campus
For more information, contact the Office of Special Events at [email protected].
Fordham Graduate School of Business AdministrationPeter Pace
Share. Twitter Facebook Google+ Pinterest LinkedIn Tumblr Email