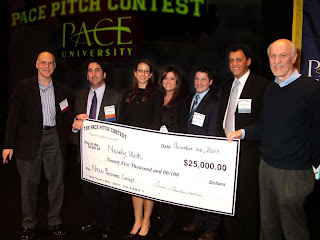 Seven months after leading a team to first place victory at the Baruch College and Merrill Lynch Invitational Entrepreneurship Competition, Allen (wearing glasses in the above photo) has led a team to victory in the Pace University Pitch competition.

Allen’s team won two top prizes – The TechSpace Prize of Six Months of Office Space for a New York City Start-Up Pitch, valued at $15,000, and a check for $25,000 from the Lubin School of Business Prize for the Winning New Business Concept Pitch. Both will help Allen’s launch of www.newlywish.com, a wedding gift registry “dedicated to uniting New York City’s rich array of independent merchants and service providers with local engaged couples and gift givers.”

Allen and her team were awarded prices on Dec. 3 at the Lubin School of Business at Pace University. In all, ten finalists and two alternates battled for over $50,000 in cash prizes at the sixth annual competition. The finalists and alternates, who hail from a dozen universities, were chosen from over 150 entries representing 40 schools.

The Pace Pitch contest is based on the Elevator Pitch concept, popular in the venture capital community. The premise is that a concise description of business or product could be made in a few minutes, should the entrepreneur spot a potential investor on an elevator and have the opportunity to pitch their idea during the brief ride.

Allen conceived the idea for Pandora’s Wish during her own engagement, during which she discovered that stores with which she wished to register lacked online registries. After leaving her job as a federal bank examiner in January 2008, she enrolled at GBA with the express purpose of starting her own business. She continued to refine the idea throughout the course of her studies.