skip to main content
Return to Fordham University
You are at:Home»Business and Economics»Gabelli School Event Brings Together Giants of Investment World
Photos by Bruce Gilbert
Mario Gabelli, FCRH ’65, brought his longtime friend and fellow Bronx native Leon Cooperman to Fordham on May 9 for a wide-ranging, hour-long conversation that touched on everything from geopolitical events to investing strategies.

Befitting their five-decades-long friendship—the men carpooled together from the Bronx to Wall Street in the 1970s—the conversation had the feel of an informal chat, with plenty of joking and each man finishing the other’s sentences.

Do What You Love, Love What You Do 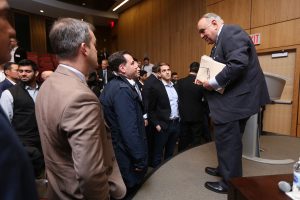 Cooperman greeted audience members and stayed for a reception after the talk.

Cooperman, a former general partner of Goldman Sachs and manager of the hedge fund Omega Advisors, credited his success to hard work, luck, and intuition. The first, he said, is not to be underestimated; even though he’s 76, he still gets to his desk at 6:40 a.m. and goes to bed at 11 p.m. He does this even though he stopped investing client money last year and transformed Omega into a family investment office.

That kind of dedication is really only possible if you love your work, Cooperman told the crowd in the packed McNally Amphitheatre at the Lincoln Center campus.

“If you want to go with the flow today, you go into artificial intelligence, asset management, biotechnology. I’m the antithesis of that; I’m a broken-down stock picker. But I maintain that the only way to be successful is to do what you love, and love what you do. I love what I do,” he said.

Signs of Both Hope and Concern for the Economy 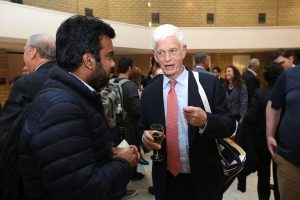 Mario Gabelli speaks to a man.

When it comes to the current state of the economy, Cooperman recalled investor Sir John Marks Templeton’s description of the market cycle.

“He said, bull markets are born on pessimism; we had that in ’08 and ’09. They grow on skepticism; we had that in ’10 and ’11. They mature on optimism, which you have now, and they die on euphoria. I don’t see many signs of euphoria right now,” he said.

That said, he said there are some things that worry him. Both he and Gabelli disapproved of the trade war currently being waged between China and the United States, for instance.

“Nobody wins with tariffs. The world loses, and hopefully there will be a resolution, which I think is what the market is expecting,” Cooperman said.

“The thing that should worry all of us around here is the economy is nearly fully employed, but the deficit is going up. In the fourth quarter last year, the economy abruptly slowed because of a very small increase in interest rates. That just tells you there’s too much debt in the system. I worry about the debt.”

The Merits of Recycling Wealth

The two touched on philanthropy as well. Gabelli, chairman and CEO of GAMCO Investors, Inc., and a major Fordham donor for whom the Gabelli School is named, asked Cooperman why he’d signed on to Warren Buffett’s Giving Pledge to give away at least 50 percent of his wealth.

Cooperman replied that you can use money to buy things that bring you pleasure, such as art, homes and airplanes, or you can give it to your children or to the government. None of those appeal to him, he said, because material possessions only bring aggravation and giving excessive amounts of money to children robs of them of their sense of self-achievement.

“The fourth thing you can do with money is recycle it back to society, and that’s what I’ve chosen to do. I’m giving back to organizations that made a difference to me and my family in my lifetime,” he said.

“The idea is not original, but it is noble. In 1900, Andrew Carnegie said, ‘You die rich, you die disgraced.’”

Asked for their thoughts on the future of capitalism, Gabelli acknowledged that the system has some problems, but asserted that the meritocracy and rule of law that underpin it in the United States make up for its shortcomings. There are some things, however, that need to be addressed sooner rather than later.

“We have to deal with student loans. This is a real problem, and it’s got to be changed. We have $1.4 trillion in student loans, and we’ve got to solve that. Simple things, like letting you do pre-tax dollars to pay, and the schools have to be more practical about certain things,” he said.

The event was presented by Fordham’s Gabelli Center for Global Security Analysis. 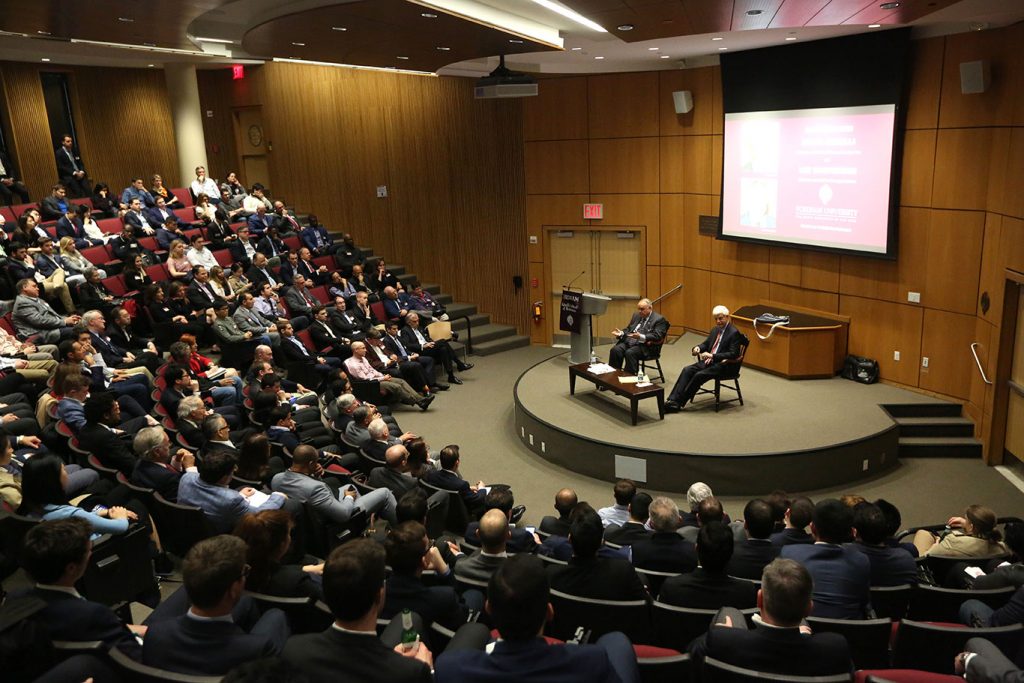