The event, the first of a series dedicated to the centennial, was held at the Times Square headquarters of PVH Corp., the parent company of brands such as Calvin Klein and Tommy Hilfiger. The firm, whose chairman and CEO is Manny Chirico, GABELLI ’79, made a gift of $1 million to the Gabelli School. It also established a partnership with the school to enhance corporate social responsibility through coursework, speakers, visiting scholars, and academic conferences that will convene global thought leaders. 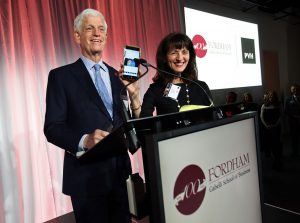 Regina Pitaro queued up Frank Sinatra’s “The Best is Yet to Come” for the audience.

Mario J. Gabelli, a 1965 graduate of the school that bears his name, kicked off the evening with welcome remarks. His wife, Regina Pitaro, FCRH ’76, joined him at the podium, using the opportunity to play a clip of Frank Sinatra’s “The Best is Yet to Come” over her phone for the audience.

“What made America great? Manny is a good example. PVH is a good example. Same thing with Fordham. It was the rule of law and the meritocracy with all its flaws,” said Gabelli, who made a $25 million gift to the Gabelli School in 2010.

To that end, Donna Rapaccioli, Ph.D., dean of the Gabelli School, announced that the school is embarking on a $75 million capital campaign. Among the goals of the campaign are funding scholarships for students, enhancing the school’s MBA and Ph.D. programs, and providing faculty support in recognition of outstanding research and innovative teaching.

“The campaign will support faculty as they engage in research with impact and ensure our curriculum is industry-relevant, with a focus on technology, ethics, and leadership,” she said. 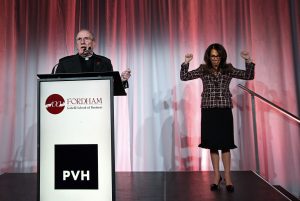 “It will support leadership and career development and programs that help our students prepare for an ever-changing world.”

Rapaccioli reflected on the school’s past and noted how much has changed since its founding in 1920. The subway cost five cents to ride, and tuition to Fordham’s business programs was $175 for day students and $100 for evening students per semester. Women also won the right to vote that year when the 19th Amendment to the U.S. Constitution passed.

“1920 was also the year prohibition started—thank goodness that changed,” she joked.

Looking to the future, she said the school’s success will depend on relationships like the one with PVH, noting that the partnership is “a unique one for us because it touches so many different stakeholders.”

She noted that the school also has relationships with academic institutions like Peking University and Bocconi University and with organizations like the Sustainability Accounting Standards Board and UN PRME Principles for Responsible Management Education.

In introducing Chirico, Rapaccioli praised him for his leadership in business and fashion.

“We educate compassionate, global leaders who are forward-thinking and making positive change. Leaders who change the way the world does business. Manny Chirico is a true example of a leader who is changing the way the fashion industry operates.”

A Partnership Focused on Corporate Responsibility and Sustainability 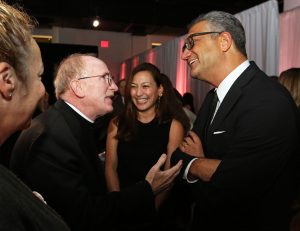 PVH Chairman and CEO Manny Chirico, right, said Fordham and PVH both exhibit “resiliency and ability to adapt to change.”

Chirico said he was excited to join forces with his alma mater to establish an academic hub dedicated to the study of corporate responsibility and sustainability. PVH is also celebrating an anniversary this year, as one of only 29 companies to be listed on the New York Stock Exchange for 100 years.

“Our two organizations have survived and prospered through two world wars, one Great Depression, 14 financial recessions, and 27 New York Yankee world championships. I believe our track records are a testament to both Fordham’s and PVH’s resiliency and ability to adapt to change,” he said.

The partnership with the Gabelli School, he said, will help PVH pursue “Forward Fashion CR Strategy,” a five-year plan it launched last year that aims to reduce the firm’s negative impacts on the environment, ensure all its products are ethically resourced, and improve the lives of an estimated one million people connected to the firm’s value chain. In March, the two organizations and EY will explore these issues in a conference, Work 2040: Future of Work in a Sustainable World Conference.

“This partnership builds on both our organizations’ shared belief that businesses are accountable for contributing to a sustainable and responsible future for all,” he said.

Natalie Dowd, a senior majoring in marketing, shared how transformative an education at the Gabelli School can be. Although she found it difficult to find her place when she enrolled in 2016, something clicked when she discovered Social Impact 360, a social entrepreneurship fellowship for freshmen. 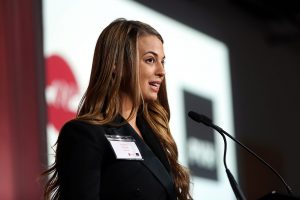 Senior Natalie Dowd, who said she found purpose and friendship during her four years at the Gabelli School.

“When I showed up at the meetings and got to brainstorm socially innovative venture ideas alongside other freshmen, I felt as though I had found both my place and my friends. I found myself so excited by SWOT analyses, writing out business plans, and creating slide decks,” she said.

“Social Impact 360 taught me that my passion for social justice could not only co-exist with my interest in business, it could also help shape the future of business itself.”

In closing remarks, Joseph M. McShane, S.J., president of Fordham, compared the gathering to the Jesuit tradition of reciting a prayer at the end of the day known as the “litanies,” where the good deeds of Catholic saints are recalled.

Standing before an estimated 400 members of the Gabelli School community and employees of PVH, he said the centennial was the proper occasion to celebrate the saints of the school. Those include Gabelli and Pitaro, Chirico, and Rapaccioli, as well as all those in attendance.

“You’re men and women with a difference, who show the world what true business leadership is about. You are for me, saints in the world,” he said.

“People come up to me and ‘Oh Father, I’m no saint.’ I’ll have nothing of that. I won’t hear that. Through you, the Gabelli name gets stronger by the day. People look at Gabelli and they say, ‘This is the school with a difference, turning out men and women with a difference, men and women whose lives are marked by competence, conscience, compassion, commitment to the cause of the human family, and character.” 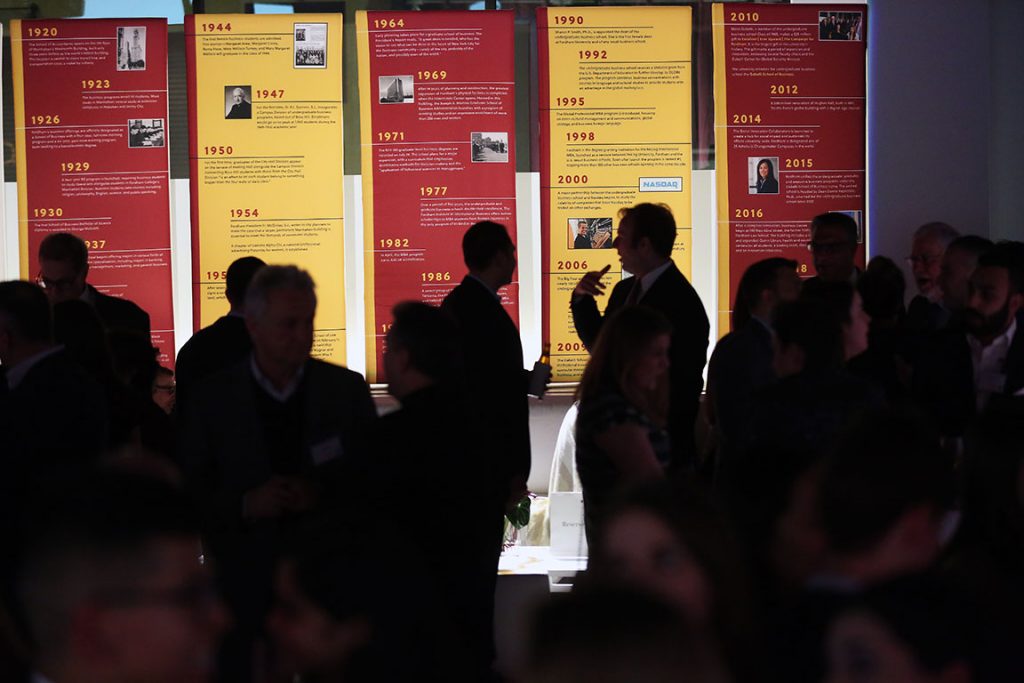 A timeline of the Gabelli School’s history was on display at the event.