“It was the oldest monument I’ve ever seen,” said the accounting major, who was making her first trip overseas. “And I was awestruck. I’d never experienced anything in America that ancient.”

Starr traveled to England earlier this year with a cohort of Gabelli School of Business students and enrolled in Gabelli School of Business in London, a study-abroad program that is housed in the Fordham London Centre in Kensington. She lived in central London in a flat with five classmates, managing to get through demanding coursework and still make weekend trips to the continent to see Rome and Barcelona.

Since beginning in 2008 as a summer-abroad experience with just 30 students, the Gabelli School of Business in London has added fall and spring semester programs, as well as scholarships. Enrollment has more than doubled since 2010 from 66 students to this year’s high of 141. Although the school is just one piece of the entire Fordham London Centre (there are also drama and liberal arts cohorts), it accounts for nearly half of the center’s students. 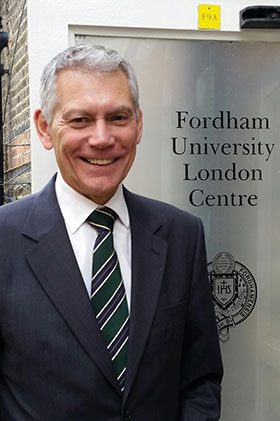 What attracts business students to London? For one thing, the Gabelli School encourages students to study abroad, and not just for the travel experience, said Graham Bolton, the program’s director.

“The goal is an immersion in European commerce and an enhanced business perspective that only an extended time overseas can provide,” said Bolton. “It’s almost a prerequisite nowadays for any business student’s C.V. to show they have that wider experience.”

And while students are encouraged to travel in their spare time, the program is anything but “education lite,” he said. Classes follow the Gabelli School syllabus and are graded the same.

In a typical fall semester, the program has 14 course offerings balanced between requirements and electives. Some electives are tailored to locale—for example, a Texts and Contexts course might focus on English writers or Shakespeare’s plays.

Three years ago, the program got a boost through the addition of internships, mostly through the efforts of Chris Hogan, FCRH ’95, partner in the London office of accounting firm KPMG. Hogan worked with Bolton to create paid internships at the firm’s London office for three to six Gabelli school students per semester.

He describes the internships as “a pretty tough gig.” Although there is management-oversight, student interns run client-facing projects that wrap up with a formal presentation to the firm’s senior leadership, said Hogan. Because work styles in London can differ from those of U.S. firms, student interns must also show flexibility, resilience, and emotional intelligence.

“It’s the kind of thing I would have loved to participate in when I was a Fordham student,” said Hogan. “So that certainly played a part [in my involvement.]”

Gabelli School junior Elan Saynay completed one of the London internships last academic year, dealing with taxation issues of individuals moving in and out of the United Kingdom. Her greatest takeaway, she said, was “exposure to global business practices.”

“I [corresponded]with individual taxpayers, tax regulation bodies, and KPMG employees in the UK and throughout the world,” she said, adding that she developed an “invaluable skill” through that experience.

Conversely, Hogan said that the Fordham interns have quickly developed a reputation for resourcefulness.

“Fordham students are business thinkers, but they are also capable writers who can be relied upon to express themselves well,” he said. “That is not common these days.”

In an effort to continue the Gabelli School in London’s expansion, Bolton is working to attract students from Fordham’s sister Jesuit universities. Hogan and Bolton have also talked about hosting at least one of the classes at KPMG’s offices on Canary Wharf—the new financial center rivaling the heart of Old London’s financial hub, The Square Mile.

Studying abroad left an impression on Starr, who, as a summer student, was not eligible for a London internship. She is inspired by the fact that all of the Big Four accounting firms—Ernst & Young, KPMG, Deloitte, and Pricewaterhouse-Coopers—have offices in London.

“I would definitely consider taking a job there,” she said.

Founded in 1841, Fordham is the Jesuit University of New York, offering exceptional education distinguished by the Jesuit tradition to more than 15,100 students in its four undergraduate colleges and its six graduate and professional schools. It has residential campuses in the Bronx and Manhattan, a campus in West Harrison, N.Y., the Louis Calder Center Biological Field Station in Armonk, N.Y., and the London Centre in the United Kingdom