skip to main content
Return to Fordham University
You are at:Home»Business and Economics»Gabelli School Celebrates Inaugural Undergraduate Lincoln Center Class
Photos by Bruce Gilbert
The Gabelli School of Business launched its Bachelor of Science in Global Business program at the Lincoln Center campus in 2013–2014, expanding the school’s undergraduate college into Manhattan from its traditional home on the Rose Hill campus. Four years later, as that inaugural Lincoln Center class prepared to graduate, the school celebrated their achievements at a festive awards ceremony.

At the event, held on May 18 in the McNally Amphitheatre, Donna Rapaccioli, Ph.D., dean of the Gabelli School, said the Class of 2018 served as a testament to the program’s potential. While the Gabelli School had distinguished faculty; academically talented students; and a campus in the middle of New York City, one of the most powerful financial centers in the world, Rapaccioli said there were still a few unknowns when the program started.

“There was a lot that we couldn’t foresee, but in business and in life, we learn that you can expect great things when they’re not expected,” she said.

Since 2013, the graduates have made New York City their campus, she said. Many of them participated in their first Consulting Cup challenge, launched socially conscious business ventures as Social Impact 360 fellows, and helped to enhance electric vehicles for BMW through Fordham’s Social Innovation Collaboratory. She shared that members of the Class of 2018 have also interned at institutions and companies such as Memorial Sloan Kettering, Bloomberg LP, and the Dr. Oz Show. This year’s graduates have accepted offers at companies such as the Goldman Sachs Group, JPMorgan Chase, and CNBC, Rapaccioli said.

“Truly [this]inaugural class of the Gabelli School of Business has exceeded our expectations,” she said, “but I know…the best is yet to come.”

The Lincoln Center awards ceremony conferred awards upon dozens of students, including Dean’s Award recipient Victoria Cleveland and Alumni Chair Award recipient Joseph Gorman. In addition to recognizing academic excellence, the Gabelli School honored students for their efforts to advance the educational and social programs of the school across a variety of concentrations, from global finance and business economics to digital media and technology.

‘Pioneers’ of the Gabelli School

During the ceremony, Michael McSherry, GABELLI ’78, was awarded the 2018 Gabelli School of Business Alumni Inspiration Award, which honors an alumna or alumnus who has made an admirable contribution to the present and future of the Lincoln Center program. An EY retired executive partner and adjunct professor at the Gabelli School, McSherry also assists the University on entrepreneurship curriculum as a member of the Fordham Foundry’s Entrepreneurship Advisory Board. In his speech, McSherry called this graduating Lincoln Center class “pioneers” of the Gabelli School. He advised them to continue to dream big and set audacious goals.

The International Awareness Award went to Andrea Mennillo, parent of Francesco Mennillo, GABELLI ’16. A senior partner and managing director of IDACAPITAL, Mennillo serves as the international chair of the Parents’ Leadership Council and a member of the executive committee of the Gabelli School’s advisory board. He said he sees the graduates as “ambassadors of the Gabelli School of Business and its distinguished values.” 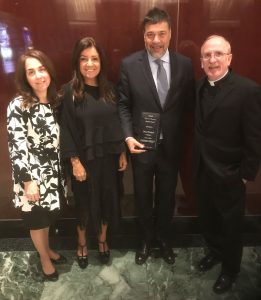 “My request to you is that you embody those values in your careers and life,” he said. “Please remember to be compassionate business leaders. This will help you to discover and create new ideas and make them accessible to the next generation.”

Gabelli School faculty were also celebrated for their distinguished achievements. Mathematics professor David Swinarski received the Gratias Tibi Award  in recognition of his contribution to the overall experience of students and faculty. The Faculty Cura Personalis Award, which recognizes a faculty member who embodies the University’s Jesuit values and focuses on “care for the whole person,” went to James McCann, a lecturer in finance and business at the Gabelli School, and Brian E. Johnson, Ph.D., an associate professor of philosophy at the Fordham College at Lincoln Center.

At the 2018 graduate awards brunch, held earlier in the week on May 14, the Gabelli School also honored Dario Werthein, GABELLI ’91, with the Alumni Award.

Wertheim, who worked on his family farm, spoke about the importance of hard work and said that his time at Fordham helped reinforce the values he was raised with. He said that Gabelli School faculty provided him with valuable professional advice.

The graduate awards brunch recognized the distinguished accomplishments of graduating master’s students, faculty, and alumni. Students were honored for service, for overall academic success, and for achievements in their chosen concentrations.