skip to main content
Return to Fordham University
You are at:Home»Business and Economics»Gabelli Awards Night Honors Past, Present, and Future Supporters
Senior Bentley Brown, above, received the Trailblazer Award at the Gabelli School’s Awards Night. He was one of nearly two dozen students honored.
At the Gabelli School of Business Awards Night on May 18, three of the program’s speakers touched on the theme of support received from others and the importance of paying it forward. 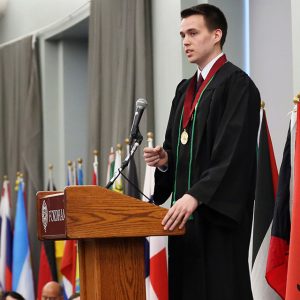 Donna Rapaccioli, Ph.D., dean of the Gabelli School (GABELLI), recalled gestures both large and small that helped her develop personally and professionally. Her grandmother, she said, always reserved a quiet space at her house for Rapaccioli to study, while cooking her nurturing meals.

“Her potato-and-egg omelets, Eggplant Rollatini, and Sunday gravy, which I ate all week, fueled my scholastic career,” she said.

When Rapaccioli was completing her dissertation and needed technical help on the computer, she said, her father, who never went to college, managed to find her a programmer—“and this was waaay before Google!”

The dean mentioned support and inspiration from two others: Associate Professor Frank Werner, Ph.D., one of her teachers, and the school’s benefactor Mario Gabelli, GABELLI ‘65, who often “peppered” her with questions, and took an interest in her career.

“If you’d told me 30 years ago that I’d have a billionaire mentor, I would have called you crazy,” she joked. “But he is a true supporter. Mario exemplifies giving back. And he reminds us that to envision the future, we must look to the contributions of young people.”

She encouraged the graduating class to “remember your helpers, aim high, and always be humble and kind.”

Class valedictorian John Witkowski recalled freshman orientation four years earlier, when he and his follow students were welcomed by Joseph M. McShane, S.J., president of Fordham. Father McShane, he said, told the students that they were the “smartest class to enter Fordham.” Witkowski said that the graduating class shouldn’t misconstrue the truth behind the remark.

“We shouldn’t have interpreted being called the ‘smartest class’ as an homage to our success—credit belongs to the classes who had come before us,” he said. “It was their work that transformed Fordham over the years and convinced us to enroll.” 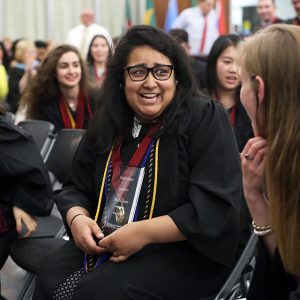 He then congratulated his fellow classmates on contributing to the legacy, and welcomed the next “smartest class.”

The Alumna of the Year award went to Christine Lowney, GABELLI ’98, partner at Ernst & Young. Lowney said that even though commencement weekend was a time for looking forward, students should carve out time in their future to come back and contribute to the school’s legacy.

“You as alumni can now play an active role in supporting your alma mater; I would dare to say you have an obligation,” she said.