A 2012 graduate of Fordham’s Gabelli School, she first studied psychology as an undergraduate at Boston College.

“I didn’t have an undergraduate business degree and really used my time here building on my acumen to my make myself a better employee at my prior organization,” Greenwood told Gabelli School students who gathered in the McNally Amphitheater for her Sept. 19 talk on integrated marketing for the Olympics.

The talk was part of the marketing and consumer insights concentrations’ Speaker Series, which brings key industry talent to Fordham to inspire students with possible career tracks.

As the director of Olympics sales marketing at NBC Universal, Greenwood is responsible for ensuring that high-profile U.S. Olympic sponsors like Procter & Gamble, Visa, and Nike are incorporated into ads that run during the historic games.

Those TV ads, which went viral during the 2016 Rio de Janiero Games, told “authentic” stories about the athletes while accentuating the brand’s corporate message, Greenwood said.  The emotional videos were also shown on platforms like NBC’s Today show.

“It’s a window where some moms that buy P&G brands are paying attention,” said Greenwood. “So even if a viewer is not huge sports fan, they may be tuning into the Today show and they’re getting Olympic content. We utilize that access point.”

“A Moment of Acceptance,” another global Olympic Games campaign that NBC spearheaded, featured refugee athletes that were associated with its sponsor, Visa.

“Diversity is something that every network and every media company is working through each day,” said Greenwood. “But Visa was a brand that actually came to us and said they wanted their campaign to be about acceptance.”

During the Rio Games, NBC, which has the rights to broadcast the Olympics on television and online until 2032, secured $1.2 billion in national ad sales, according to Advertising Age. 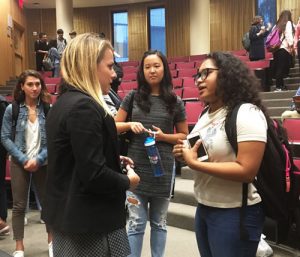 Sarah Greenwood meets with Gabelli students after her presentation.

“My job was maybe a little easier 20 years ago when [the Olympics]was only on TV,” said Greenwood, who said that nowadays Olympics programming is also broadcast on NBC Universal networks such as Bravo, MSNBC, USA, and NBCOlympics.com. “Now we’re integrating our brands everywhere.”

Greenwood said that media consumption habits continue to evolve, as people watch Twitter, Facebook, and Snapchat content on their computers, smartphones, and TVs at home, at work, and during their commute.

To stay ahead of the trends, NBC is constantly trying to make the Olympics more accessible to foster new generations of Olympics viewers—though fewer people consume content digitally than on television, she said.

“It’s just a reminder that television is still an unbelievable platform for any live event, especially the Olympic Games,” said Greenwood. “People still want to go home and watch [it]with their families.”

As NBC prepares for the 2018 Winter Olympics in Pyeongchang, South Korea, Greenwood believes the industry will continue to expand with the emergence of new technology and social networks—keeping in mind the main sales objective during the games remains increasing “ad views.”

She said her team has been exploring live look-in opportunities, which could alert smartphone users when their favorite athlete is competing and provide short streams of the games to digital viewers.

Since media consumption could change in the future, nothing is set in stone.

“There could be a platform that doesn’t exist right now that changes the way we do business.”

Sarah Greenwood, director of Olympics sales marketing at NBC Universal, talks about marketing for the Olympics.