skip to main content
Return to Fordham University
You are at:Home»Business and Economics»Fordham’s First Hackathon Blazes Trail to ‘Silicon Alley’

An app that inventories your favorite charities. A program that can distinguish your left hand from your right. A web interface that translates Spanish to English with flair.

These are just three of the many tech creations born of Fordham’s first-ever competitive hackathon, which was held on Dec. 6 at the Fordham Foundry.

Nearly 100 students turned out for what Wired called “the latest example of the recent surge in tech and business activity throughout the Bronx.” The Fordham event was part of a nationwide Local Hack Day devised by the national student hackathon group, Major League Hacking.

At 33 schools across the country, students of varying technological prowess gathered on their campuses to build websites, web and mobile applications, hardware hacks, or whatever else they could dream up—in just 12 hours.

“The point is to build”

Fordham’s hackathon—which was sponsored by Evernote, whose CEO Phil Libin is himself a Bronx native—drew students from all areas of the University, from computer science majors and coders, to designers and business students.

“It gives everyone an opportunity to be immersed in technology, whether you’re an advanced coder or you’re just beginning,” said Edward Cullen, FCRH ’09, director of innovation and programs at the Foundry.

“The point is to get students to build—whatever they want, however they want—and to engage and network with their fellow classmates throughout the day.”

Carrying the day amid steep competition were Fordham College at Lincoln Center computer science students Alex Keyes and Reed Garvin — a junior and a sophomore, respectively — and Gabelli School of Business senior Ross Garlick, an accounting and finance student. The team won first prize for their app, Flarity, which allows users to sift through an index of charities to which they can contribute.

In addition to potentially generating the next hit product (both the Facebook “Like” button and Twitter itself were conceived at hackathons), a hackathon provides students with an opportunity for experiential learning, which Cullen said is indicative of a transformation in education overall.

“Experiential education is becoming the norm. In the past, we’ve had this model based on convergent thinking—for instance, taking a multiple-choice test and having to pick the right answer,” he said.

“A hackathon is an example of divergent thinking, because you’re given a problem with many possible outcomes. Hackathons invite students to open up their minds, to think creatively, and to see all of the possible answers in order to arrive at a conclusion.”

Bigger and better things to come

The Foundry, which organized the event along with Fordham’s Computing Sciences Society and Digital Business Society, is planning a much larger hackathon this spring. Cullen expects a number of sponsors and recruiters to attend, which has become customary at hackathons. 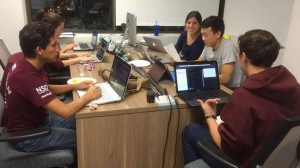 “Recruiters love to come to these,” he said. “In technology, you have to show what you can do. A hackathon is the prefect environment for that because participants can’t prepare for it—you have to go as-is and use your skills. Recruiters get to see the students working on their projects and will actually conduct interviews on the spot.”

Besides benefitting the burgeoning technologists, a Fordham hackathon also bodes well for the community, Cullen said.

“With Manhattan taking off as ‘Silicon Alley,’ tech companies are always looking for more talent… And over the last two to three years, there has been an emerging technology presence in the Bronx, but no one has taken it to the next level yet. We think that as these hackathons get bigger, there will be more opportunities to build up that technology presence in the borough,” Cullen said.

“Fordham is emerging as a leader in the digital revolution and people are starting to take notice,” he continued. “We want to build on that momentum. The more we grow, the more positively it will affect the Bronx economy.”