skip to main content
Return to Fordham University
You are at:Home»Business and Economics»Fordham Student Drives Summer Business to Success 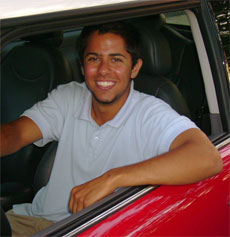 Norman Dannen, a Fordham College at Rose Hill junior, has yet to take a business course, but he has shown himself to be a savvy entrepreneur nonetheless.

Dannen, a double major in international political economy and classical languages and civilization, is a co-founder of the Wingmen Driving Service, a New Jersey-based designated driving business for people who have had one too many at the local bar. The company slogan, which Dannen distributes on business cards and flyers to bars and restaurants along New Jersey’s Gold Coast, is “We drive you and your car home.” The homegrown business, which Dannen and three of his childhood friends started in May, has become a lucrative summer job.

“It was an idea that was just too good to pass up,” Dannen said. “And there is a great need for it, there’s so many bars and so much drinking. All it took was a little motivation and we were on our way.”

The four students took their inspiration from a similar service in London called ScooterMan. Wingmen charges $20 to drive someone home in his or her own car anywhere within a designated area of New Jersey, south of the Hudson River, across from New York City. The students plan to offer the service through Labor Day and on some weekends thereafter.

The service has caught the eye of several local newspapers and The Chronicle of Higher Education. It has also, Dannen said, piqued the curiosity of local business people. “We had investors come to us and say ‘Strike the irons while they’re hot,’ and tell us to quit school and go for it, but we want to finish school first,” he said. “After that, we’ll see where we will go.”