skip to main content
Return to Fordham University
You are at:Home»Business and Economics»Fordham IPED Grad Is D.C. Bound

Wander Cedeño, GSB ’10, GSAS ’12, just accepted a job at the U.S. Bureau of Labor Statistics in Washington, D.C., where he will be an economist covering energy and chemicals. The 25-year-old spent most of the past year as a New York City Urban Fellow in the city’s Department of Parks and Recreation, where, among other things, he helped assess and catalog the damage caused by Hurricane Sandy in Manhattan parks. 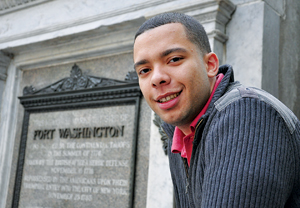 Fordham Notes talked with Cedeño about his new job offer and his time at Fordham, where he earned his bachelor’s in economics and his master’s in international political economy and development (IPED). He was inspired to pursue the latter degree after a meeting with Leonel Fernández, former president of the Dominican Republic, whom he personally greeted on Fordham’s campus in 2008.

Does this new position live up to your expectations as your first real full-time job?
This is better than what I had envisioned. It’s the preeminent fact-finding agency in the U.S. government. It’s a great place to start a career.

How did you go about securing this position?
I applied in November through USAjobs.gov, the federal job site. I didn’t really think twice about it because I’ve applied for so many positions. Three months later they called. We set up two phone interviews, but then I was going to be in D.C. for (President Obama’s) inauguration, so I could go in person. That’s what made the difference.

How has Fordham prepared you for your new role?
I was an econ major at the Gabelli School. Economics was a way for me to understand the social inequalities in my community—Washington Heights. I’m a lifelong resident. My professors always stressed to look beyond the numbers.

Also, I was member of CSTEP (the Collegiate Science and Technology Entry Program). I worked for them this past summer. I love CSTEP. They provided a lot of guidance along the way.

You are the first member of your family to go to a four-year college. How did your parents react to this job offer?
They’re absolutely ecstatic. They’re very supportive. It’s bittersweet, leaving New York. But I think everyone understands the journey. Not only mine, but my family’s journey, coming to America 30 years ago. And this is part of the reason.