skip to main content
Return to Fordham University
You are at:Home»Business and Economics»Fordham GBA Celebrates Winners of 2012 Business Challenge

The Fordham Graduate School of Business Administration (GBA) honored the winners of its first Business Challenge at the Lincoln Center campus on June 14, awarding more than $200,000 in tuition scholarships for incoming students.

Andrew Adams, Nyambura Mbugua, and Meghan Barquinero will receive full scholarships to the college following their participation in an online contest held in conjunction with the internet company, Student Competitions.

Nyambura Mbugua, who graduated from the State University of New York (SUNY) at Old Westbury in 2011, received her scholarship to attend the M.S. in Business Enterprise program (MBE) from Marcia H. Flicker, Ph.D., associate professor in marketing.

Meghan Barquinero, FCRH ’06, was awarded a scholarship for the M.S. in Marketing Intelligence (MSMI) by Peter Johnson, Ph.D., lecturer of marketing. Barquinero was making her return to Fordham, which is also her father’s alma mater.

A partial scholarship and admission to the new M.S. in Business Analytics program (MSBA) was given to Andrea Gallego, a 2011 graduate of SUNY Stony Brook.

Second and third place awards were also given to students applying for the MSEP and MBE programs. In addition to the scholarships, two industry internships/workshops were awarded.

David A. Gautschi, Ph.D., dean of GBA, told attendees that opening up the admissions process to an online contest was a new concept for the college, one that showed promise.

Entrants were asked to solve and present a real-world business problem, and their submissions were open to the public for voting. Submissions were vetted by Fordham faculty and by volunteer experts from private industry. 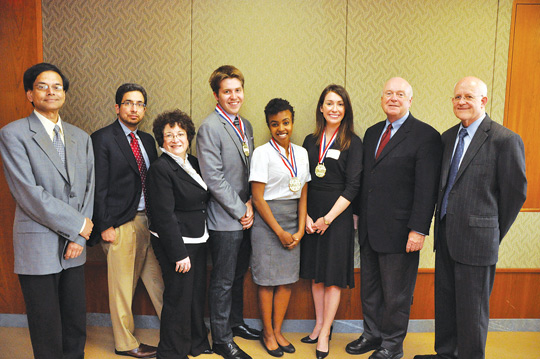 Robert Lyngman, co-founder of the Stockholm-based studentcompetitions.com, noted that the contest, which ran during the month of May at fordhambusinesschallenge.com, attracted 390 participants, 20 of whom submitted entries. There were 525 votes cast for the winners.

In addition to touting the collaboration between Student Competitions and Fordham, Dean Gautschi said the four new programs illustrate the way GBA is shifting the focus of its programs to reflect the needs of the global marketplace.

Integrating problem solving into the admissions process may also be beneficial when evaluating international students, he said: Half of GBA’s incoming class in September will hail from outside the United States.