skip to main content
Return to Fordham University
You are at:Home»Business and Economics»Experts Predict Imminent Rise of Blockchain Technology
“Blockchain will do for transactions what the internet did for communications,” said IBM’s Bridget McDermott.
In opening remarks at a Fordham/IBM sponsored workshop, Joseph M. McShane, S.J., president of Fordham, compared Blockchain, an incorruptible digital ledger system, to the Jesuit’s use of ciphers in the 16th century to relay communications to the Jesuit General in Rome.

“We have a long and storied history in the drawing up of ciphers in order to ensure that the information that was flowing to Rome was safe and secure,” said Father McShane. “If the Blockchain technology is new, the concept is ancient: how to build and support trust among different parties and how to protect information.”

Father McShane made the remarks at a collaborative workshop on Blockchain technology held at Fordham’s Lincoln Center campus on Jan. 26. The workshop brought together experts from law, economics, business, enforcement, and technology.

“Blockchain will do for transactions what the internet did for communications,” said Bridget McDermott, vice president of Blockchain Business Development at IBM.

Blockchain is best known as the architecture that supports Bitcoin, the digital payment network. Just as Bitcoin’s momentum over the past two years has propelled it to become the leading cryptocurrency, the next 12 to 18 months could very well be the make-or-break moment for Blockchain to become as the standard for business transactions, said Dan Ramsden, GABELLI ’90, a lecturer at the Gabelli School of Business and managing director at Oberon Securities.

“There’s that point at which adoption is just essential,” said Ramsden. “The fundamentals of Blockchain are so compelling in theory, but we need to get to that tipping point. When this occurs, I think IBM will be a big part of it.” 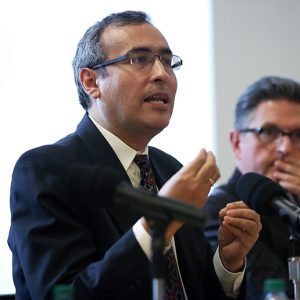 Erick Rengifo said the technology will help small businesses in the developing world.

Ramsden wasn’t merely complimenting the company because it was sponsoring the conference along with Fordham; he was referring to a version of Blockchain that IBM has developed from the ground up. That “immutable ledger” keeps track of the history of a transaction from start to finish via a “permissioned network, with known identities.”

In her keynote presentation McDermott explained that the design helps “build ecosystems and partnerships” but most importantly it builds a circle of trust. The network’s instance of known identities prevents anonymous users with nefarious intentions from disrupting the flow of the transaction. Secondly, the immutability of the ledger means that when a mistake happens, it can’t be covered up.

The presenters used a mock transaction to show how the process might work in importing goods from one country to another, say from China to Germany. On one end of the Blockchain is the exporter, whose identity has been verified, and on the other end of the is the exporter. The process starts with a purchase order; then the goods are inspected at the Port Authority of Hong Kong; then they’re shipped to the Port of Hamburg, where that port authority signs off on the goods; then they’re sent to the exporter, who in turn pays for the goods. At each point, all parties have access to the shared digital ledger. If something goes wrong along the route, parties know immediately and can respond accordingly, rather than entering into a dispute that is both costly and time consuming, said McDermott.

“With the shared leger, everybody is looking at the same information,” she said. “And it’s like doing a crossword puzzle in pen, so if there’s a mistake you can’t hide it.”

Few panelists had anything negative to say about the technology, including FBI special agent Joseph Battaglia,. He praised the ledger’s ability create a permanent record of transactions, as well as an IBM version that uses a secured identity.

“If everything is recorded and not able to change, then it’s very good from an evidence perspective,” he said.

Gregory Xethalis, counsel from Arnold & Porter Kaye Scholer LLP, said “if you can safely move currency where everyone can see and no one can hack or steal, that’s a remarkable advance.”

Erick Rengifo, Ph.D., associate professor of economics, said that the technology could be a game changer in developing nations, where trade can sometimes be stymied by banks.

“In the developing world the local banks are driving the trade, but they have limited resources,” he said. “Blockchain is way to create a public entity that will allow any type of investor to get funds to many of these small firms.”