skip to main content
Return to Fordham University
You are at:Home»Business and Economics»Economic Turmoil Provides Grist for Professor’s Research 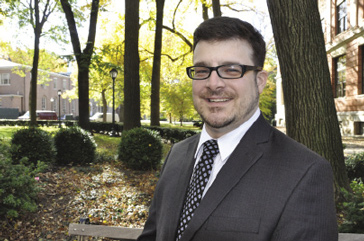 When United States financial markets get into trouble, congressional leaders feel the need to act decisively to remedy the problem.

Horton, an assistant professor of law and ethics in the Fordham Schools of Business, studies the federal regulation of business in the aftermath of financial crises. His research topics include Sarbanes-Oxley, the Troubled Assets Relief Program (T.A.R.P.) and, most recently, the Dodd-Frank Wall Street Reform and Consumer Protection Act, which was passed in July 2010.

“Every time there’s a financial crisis, Congress acts and regulations are put in place. Sometimes they work; sometimes they don’t. Regardless, Americans expect their lawmakers to do something, so lawmakers do something—even if poorly thought out,” he said.

“One example of economic legislation that did work well was in the aftermath of the bank runs that fueled the Great Depression. The passage of the 1933 Banking Act and the creation of the Federal Deposit Insurance Corporation (FDIC) prevented future runs on the bank. People were no longer worried that there’d be no money left if they didn’t get to the bank in time, because the act insures consumer deposits up to $250,000.”

Dodd-Frank, on which Horton did his most recent work, is less impressive, he said. In “How Dodd-Frank’s Orderly Liquidation Authority for Financial Companies Violates Article III of the United States Constitution” (Journal of Corporate Law, 2011), he argued that the legislation unduly transferred powers from the courts to the executive branch.

Dodd-Frank was crafted so that non-bank financial companies that are in distress can be treated as if they are banks and liquidated by the FDIC—should the U.S. Treasury Department deem them to be a risk to the financial system as a whole.

“Let’s say a non-bank financial company such as A.I.G. has a cash flow problem. Traditionally it could go through Chapter 11 or through a strategic merger. But under Dodd-Frank, there’s a procedure for the Treasury to pick that company up, out of Chapter 11, and drop it into a different bucket, which is orderly liquidation by the FDIC,” Horton said. “The courts are removed from the process and federal regulators have virtually unchecked powers to marshal assets and pay creditors.

“How they choose which companies to pick out is largely arbitrary and based on a finding of ‘systemic risk,’” he said. “It is reminiscent of Justice Potter Stewart, who famously said of the legal definition of pornography in Jacobellis v. Ohio, ‘I know it when I see it.’”

What constitutes systemic risk has yet to be clarified by Ben Bernanke, the chairman of the Federal Reserve Bank, or any other relevant federal agencies. That is the subject of another paper on which Horton is working, titled “Dodd-Frank’s Vagueness Problem,” which is forthcoming in the Journal of Corporate Law. But even if “systemic risk” were better defined, Horton said, it’s clear that the venue for resolving this kind of issue has traditionally been the courthouse, not the Treasury.

“We have over a century of precedent in the United States dealing with these issues, so it’s relatively clear where those powers are located,” he said. “Resolving non-bank financial companies—state-chartered corporations—has traditionally been the job of Article III judges.”

The fact that a law might be vaguely worded or even unconstitutionally grant power to the executive branch is not surprising, given how much pressure there is for legislators to act quickly in the face of financial crises, Horton noted.

As to the former, “Congress will pass legislation with vague language so that its members can have plausible deniability. It allows them not to make really important decisions, but instead it leaves that to a federal agency to clarify the legislation through rule-making.”

It follows that Horton’s research calls into question the conventional wisdom that Dodd-Frank is an improvement on the legal structures that preceded it. “It is a change,” he said, “but it strikes me as a change for change’s sake.”

On the other hand, it’s also important to remember the context in which laws are crafted. A bill’s authors might also simply want to give federal agencies as much flexibility as possible. T.A.R.P., which was passed as part of the Emergency Economic Stabilization Act of 2008, is a good example.

“Remember, this is 2007-2008, when everyone was afraid the financial markets were going to crash. At the time, the feeling was, ‘We need to give these federal agencies, which hopefully have very intelligent people in them, the power to guide us through this, to solve the problem and to act quickly.’”

With his second paper on Dodd-Frank slated for publication, Horton has changed gears, and is now examining the fiduciary duties of limited liability companies (LLCs). By their very nature, LLCs are sort of a “Wild West” of investing, he said. Publicly traded corporations are bound by law to maximize the return to shareholders in the circumstance of a merger or an acquisition, but the same is not necessarily true of publicly traded LLCs.

So what happens when an LLC goes public?

“A huge conflict is developing because you have two paradigms. One is totalfreedom of contract, and the other includes some protections for shareholders. LLCs work fine when they’re closely held, but when you begin to make the LLC look more like a publicly traded corporation, the paradigm breaks down, and you begin to think, ‘Maybe we do need to have some protections for those members,’” Horton said.

“In re Atlas Energy Resources, a recent Delaware court case, deals with that in detail, and generally what the courts said is, ‘We’re going to impose traditional duties on this publicly traded LLC, even though the operating agreement says that they don’t exist.’ This is uncharted territory.”