skip to main content
Return to Fordham University
You are at:Home»Business and Economics»During an Event to Welcome the Class of 2026, Mario Gabelli Provided Sage Advice to Students Just Beginning Their Academic Journey at the Gabelli School of Business
Photos by Bruce Gilbert
As he has done for many years, Mario Gabelli, chairman and CEO of GAMCO Investors and noted philanthropist, returned to the Gabelli School of Business to share his insights with incoming students. This year, he visited campus on Sept. 12 to welcome the Class of 2026. Gabelli, who was senior year president of the Class of 1965, and who graduated summa cum laude from the school that now bears his name, gave students sage advice and provided them with an optimistic view of the business world despite recent troubling headlines and disruptions.

During his many past engagements with students, Gabelli has told them that he likes to hire candidates with a Ph.D.—meaning “poor, hungry and driven,” which he proudly claims as being part of his own background growing up in the Bronx. But this time, he referred to Ph.D.s as being “passionate, hungry, and driven.” To illustrate this point, he cited the story of a Gabelli School student from China who took the initiative to travel to Connecticut where Gabelli was meeting with clients at a function.

“He came to Greenwich where we were having a meeting for our clients, and asked for a job—and I said, ‘You are exactly what we want: passionate, hungry and driven.’ And we hired him on the spot.”

He added that this particular student understood one of his oft-repeated mantras. “If you don’t ask, you don’t get,” he said, referring to what he calls his “11th Commandment.”

Gabelli learned early on that hard work and perseverance pay off. He went from working as a caddy at a local golf course to investing in stocks from the age of 13 to graduating from Fordham and earning an MBA from Columbia University Business School in 1967—as well as being enrolled in (but never attending) the Ph.D. program at NYU.

After a career of almost 10 years on Wall Street as a sell-side analyst, Gabelli launched his own firm in 1977, GAMCO Investors, which now manages more than $30 billion in assets. 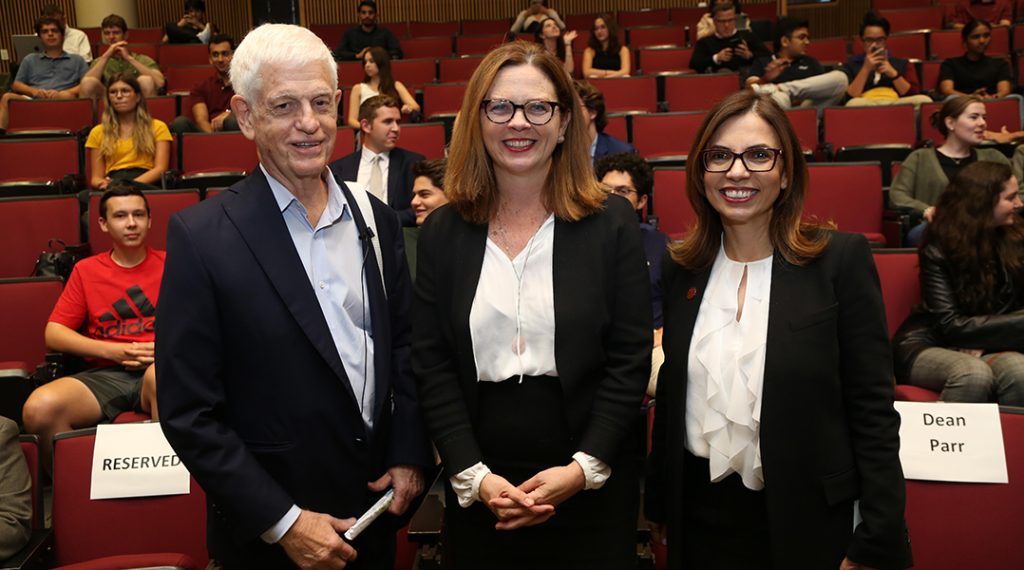 During his presentation to the Class of 2026, Gabelli hit on several investment “I” buzzwords, including inflation, interest rates, infections, invasions, infrastructure, and incomplete energy policies. While he acknowledged some level of international turmoil, he assured students that current global economic challenges would give way to major opportunities over the next 10 years.

During the Q&A segment that followed, students persisted in voicing their concern about international affairs and market volatility. One asked about the looming European recession, to which Gabelli responded, “Stop worrying about recession. You have recessions every three or four years, so what?”

He did acknowledge that countries such as Germany are facing a rough winter due to Russia cutting energy supplies, but he also focused on potential positive responses and results.

Gabelli noted that ultimately, the concerns of the past have been met with a “massive increase in innovation” and that students should seek out opportunities through research.

He also stressed the importance of working hard.

“Work from five to nine when everyone works nine to five and just read everything that you can about anything that you do, whether it’s investment banking, sales, marketing, or product innovation,” he recommended.

“Yes. You don’t get it if you don’t ask,” responded Gabelli.

“So, someone has to ask,” the student replied, “do you think I can come work for you three years after I graduate?”

“Ah, see you asked the wrong way,” Gabelli answered. “How about, ‘I would like to learn the disciplines of your firm and serving customers. And I’d like to join you tomorrow,’ not in three years. You’re going to change your mind. You’re going to get rich in between. Why not tomorrow?”

“Do I have a chance to rephrase my question?” the student asked.

“Yes! That’s a smart guy, instant thinking,” Gabelli responded. “You know how to reach me.”