Since Jorge Mario Bergoglio became Pope Francis in 2013, the native Argentinian has brought renewed attention to the Christian ideal of selfless service to humankind and the call of all who believe to that service.

The Jesuit has singled out society’s relentless chase of possessions as a “the great danger in today’s world” and encouraged political leaders to consider financial reforms that stress ethics.

“Money must serve, not rule!” Francis wrote in his Evangelii Gaudiam (Joy of the Gospel), an exhortation published in the year his papacy began.

In some circles, this plea has led to the pope being labeled a socialist and dangerously naïve about financial matters.

But a group of panelists in a Fordham University discussion this week, “None of His Business? Pope Francis on Capitalism,” agreed that the resistance Francis is facing is nothing new, nor is the pope’s belief that people of faith can do better. 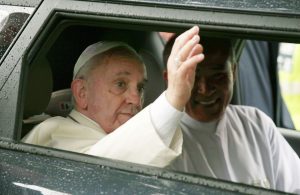 Leo argued that “some opportune remedy must be found quickly for the misery and wretchedness pressing so unjustly on the majority of the working class.”

Francis is doing something similar, Anderson told an audience of more than 50 Fordham faculty, administrators and students at Hughes Hall.

This pope knew that when he said this, that he was [going to face]a lot of opposition,” Anderson said of Francis’ exhortation.

That opposition was often pointed.

“Thank God, so to speak, that his teaching authority is limited to faith and morals, because in matters of economics, he is wide of the mark,” wrote Fox News commentator Andrew Napolitano.

The criticism was part of the pope’s strategy, said Christine Firer Hinze, Ph.D., a professor of theology. Francis has succeeded in getting everyone’s attention.

Anderson said the pope tried to address his critics in his exhortation, and panelists argued that a stand against capitalism without an ethical underpinning is not the same as socialism or even a denunciation of capitalism.

Adam Smith, the 18th-century political economist often cited by capitalists, believed that empathy and capitalism can coexist, said Donna Rapaccioli, Ph.D., dean of the schools of business. That coexistence, she said, is stressed in her school.

“You’ve probably heard the phrase ‘conscious capitalism,’” Rapaccioli said. “Think about companies like Whole Foods, Costco, Patagonia, Chipotle, Southwest Airlines. Even Walgreens has advance inclusion and opportunity. These are successful operations, and they have been able to succeed while respecting people.”

Michael Pirson, Ph.D., an associate professor of management systems for the schools of business and the organizer of the event, agreed. Empathy is the driver of successful human relationships, and businesses that center on the common good have proven to be profitable, he said.

Empathy and business not only can coexist, they must, Francis has said.

“(T)he goal of economics and politics is to serve humanity,” Francis wrote in a 2013 letter to British Prime Minister David Cameron, “beginning with the poorest and most vulnerable wherever they may be, even in their mothers’ wombs.”

Click here to read the story on Gabelli Connect.