skip to main content
Return to Fordham University
You are at:Home»Business and Economics»CBA Students Learn What It Takes to Be Leaders 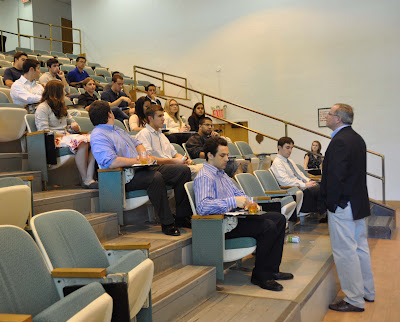 A willingness to take risks. A keen understanding of a company’s culture. A true sense of ones’ own strengths and weaknesses.

These, said John P. Lionato (FCRH, ’85), are some of the traits that Fordham College of Business Administration (CBA) students need to learn to be successful in business.

Lionato, Global Leader of Operational Excellence at San Antonio, Texas-based Rackspace Hosting, Inc., spoke to undergraduate students at Fordham’s Rose Hill campus on Wednesday, Sept. 15. His hour-long lecture and Q&amp;A session, “Being A Leader,” was one of six in Access Your Future, a week of programming for CBA students featuring industry leaders talking about life outside of academia.

To give a fuller sense of what it means to be an effective leader, Lionato went back to his own career, citing eight leaders who he’s been fortunate enough to work with. Just as they mentored him, students should seek out mentors too, and when the time comes, they should take others under their wing. One of the lessons he learned was to not fear occasional setbacks.

“More than anything else, it isn’t really whether the situation fails. It’s whether you did the best you could in the situation,” he said. “It doesn’t mean that you work so hard, and it didn’t do any good; it means that you worked smart and good, and made the best decisions you could, but the thing was just against you.”

He also told students to not be afraid to try different jobs if those jobs give them a better understanding of the company as a whole, but not to settle on one that doesn’t speak to their strengths. When they learn to recognize this in others, they will earn the loyalty of their fellow workers.

“We call people at Rackspace, ‘Rackers.’ They will kill for the company. Time has no meaning,” he said. “Why? It is all wrapped in who you are. We look at people who want to come to work at Rackspace, and the first thing question is, do they fit culturally? We’ll figure out what job they can do next.”