skip to main content
Return to Fordham University
You are at:Home»Athletics»CBA Student Driving Hard Toward Success 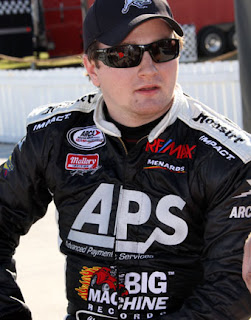 Companies, brands, places…. A degree in marketing can lead to a plethora of career options. But Chase Mattioli, a rising junior at Fordham’s College of Business Administration (CBA), has an even better product to promote: himself.

In addition to taking classes at the Rose Hill campus, Mattioli, the grandson of Lake Pond, Pa.-based Pocono Raceway founders Joseph and Rose Mattioli, is pursuing a career in racing with NASCAR. He’s currently in the midst of the 20-race Automobile Racing Club of America Series—which is to NASCAR’s Sprint Cup Series what AA baseball is to the major league baseball—with Jack Roush’s Roush Racing team.

Although stock car racing in the Poconos might seem like a world away from the urban setting of the Bronx, Mattioli said the connection between his classes and the track are closer than one might think.

“The thing about racing is that it’s not as much of a meritocracy as other sports like football or baseball. You need to be just as marketable as you have to be talented in order to be successful,” he said.

“You look at guys like Dale Earnhardt Jr. He hasn’t won every race in the series but he’s still the highest paid driver because he can market the most products and sell the most cans of soda. That’s something that’s very important to racing, because as much as I don’t like to lean on this, the car has so much to do with it. If you have a car that’s underfunded and a team that doesn’t have the money to buy tires and get the good engineers, it’s going to show on the racetrack. So having a good marketing background helps my performance on the racetrack.”

Mattioli is acutely aware of the importance of well-maintained equipment. At a recent race at his grandparents’ track, a single bolt came loose, causing his car to lose the entire drive shaft.

“One of the most common things you’ll here from anyone in the business is “That’s racing,’” he said. “Any little thing, like, you know, a plastic fork could be on the track, and I could split a tire. For me, it was one bolt that came out and cost us our run.”

Thankfully, Mattioli said this was an aberration in an otherwise successful season of racing, which for him began in February in Daytona. It’s a season that he’s been practicing for at Rose Hill, on a $2,000 racing simulator that he hooks up to the television in his dorm room. That might seem like a lot of money for a video game, but it pails in comparison to the $10,000 he said it would take to book a live practice on a track.

“With the computer technology, they can really get a trace a track perfectly as far as how it feels, every bump, nook and cranny,” he said. “If you have a tar strip where the track is cracked, they’ll put it in there, and you can feel it. Every inch is there.”

After all, Mattioli said, every little inch matters when you’re approaching speeds of 200 mph.

“You can’t just look right in front of your car and assume you can make the right turn. You have to have visuals, muscle memory, and other things like that, so that when you’re on two wide of a turn going 190, you know where you’re at and where you’re going to be. For a race in Michigan, for example, I have 18 eye points all around the track, and I gain them from the video game. They put every sign, every light and every mark on the wall.”

If everything goes according to plan, in two years Mattioli will join 2008 Daytona 500 winner Ryan Newman as the only other full-time driver in the Sprint Cup Series with a bachelor’s degree. This makes him an oddity in the racing community, but having graduated from Scranton Preparatory School, Mattioli said he couldn’t pass up the opportunity to attend a Jesuit university like Fordham. Being in New York puts him closer to potential sponsors even as the sports’ relatively low profile in the tri-state area relieves any pressure he might experience elsewhere.

“The cool thing about New York City was that I was able to come here and not be a race car driver. I could just be a college kid. The sport is popular in the city, but it’s not the Yankees; it’s not football,” he said. “It’s a nice little place where racecar drivers can hide. If I were to go to high school in North Carolina or somewhere down South, it would be kind of overwhelming.”

Aside from his two roommates, Mattioli has not shared his occupation with many people. His story, he insists, is just one of many interesting ones that students at Rose Hill have to share.

“My story is pretty interesting, but I think they all have very interesting backgrounds and lives,” he said. “My friend Ryan is one of these crazy guys; he just spent the summer hiking up Mount Sinai and traveling the Jordan and Israel. There’s a whole bunch of cool people who I got to meet just by coming to Fordham.”

Mattioli’s unofficial role as an ambassador for racing also helps his family’s track, which is a 90-minute drive away. That’s where he grew up around a culture of racing, and he’s confidant that New Yorkers who have not been exposed to it as children will learn to appreciate it.

“We just had our race in June, and I had about 20 people who’d never been to a race before come,” he said. “To see their eyes light up when the cars go by, when they actually hear the real sound, they feel the air and the ground, vibrating from the engines pulsating, it’s just such an experience. I love to bring anyone I can.”