skip to main content
Return to Fordham University
You are at:Home»Athletics»Business Analytics Students Square Up for March Madness Data Tournament

If you wagered on Kentucky or Gonzaga for Friday night’s Sweet Sixteen round, then your bracket made it one step further to NCAA victory.

Of course, the Fordham analytics students could have told you that weeks ago.

On March 27, students from across the University faced off in the final round of March Data Crunch Madness, an NCAA analytics competition sponsored by Fordham’s Center for Digital Transformation, the Business Analytics Society, and Deloitte.

The event was the culmination of a month of data-crunching for the sixteen teams of graduate and undergraduate students. Starting in February, each team had one week to analyze historical data from past NCAA tournaments, then another two weeks to analyze the current season’s data. The last step was to present their results to a panel of judges. 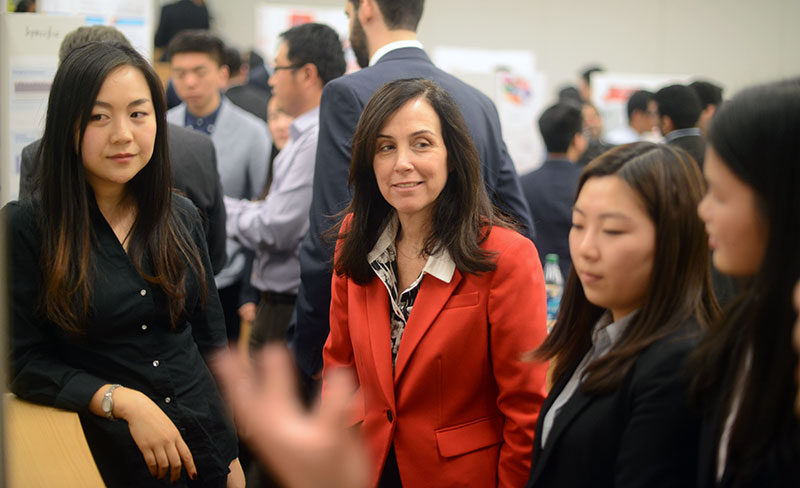 “When I saw the reports I was stunned,” said “R.P” Raghupathi, PhD, director of the business analytics program at the Gabelli School of Business.

“Many of the international students had never even heard of March Madness. Yet they were able to grasp this very complex domain and use March Madness language. That’s important, because ultimately when they go for job interviews they’ll need to relate to perspective employers using the companies’ terminology.”

One way to arrive at a prediction was through a “logistic regression” model, said Team Data Whiz—one of only two teams to be made up entirely of undergraduates. Using the mathematical model, the group calculated each NCAA team’s chances of winning and then tested the accuracy of their model using data from past seasons.

Once they determined the model was a reliable, they applied it to the current season to make their predictions.

“It’s sort of like grading—we’re basically grading the sports teams and figuring out how they would do against each other,” said graduate student Travis Petersen, an officer in the Business Analytics Society and organizer of the competition.

“Whenever you’re predicting something as unpredictable as a sports event, there’s no right or wrong answer. It’s more about trying to minimize your uncertainty.”

The teams were evaluated based on their poster presentations, methodology, and results. First, second, and third-place prizes were awarded by a panel of judges comprised of Petersen, two Fordham faculty members, and two representatives from Deloitte.

The overwhelming majority of teams were spot-on in their predictions, which made for a formidable judging process, Petersen said. To illustrate, he showed the group two graphs comparing the Fordham students’ predictions with those of renowned statistician Nate Silver. 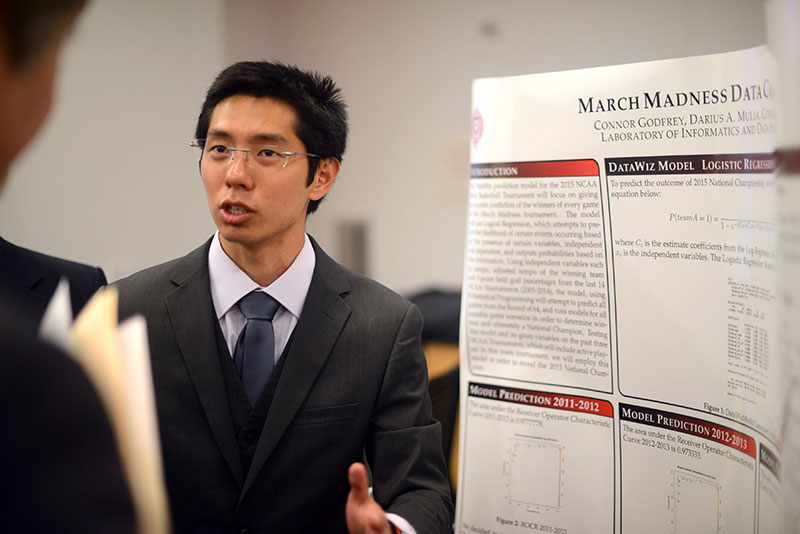 “Your predictions lined up almost exactly with Silver’s predictions,” Petersen told the students during the tense moments before the winners were announced. “That goes to show the quality of your submissions. You guys are picking in line with the universal expert in the field.”

Ultimately, Raghupathi said, the competition’s greatest payoff was the opportunity for students to test their analytic abilities in a real-life situation.

“It allows students to apply their skills to this big data set and very quickly build a model, test it, and then present quantitative data in a way that the judges will understand,” he said.