skip to main content
Return to Fordham University
You are at:Home»Business and Economics»Building Ties in China 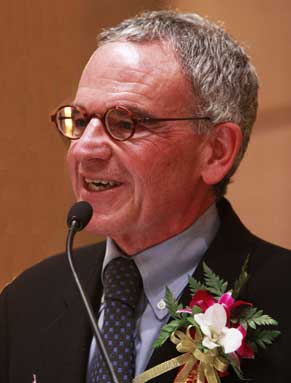 Fordham University signed on to a new joint program with Peking University, the most prestigious and highly regarded university in China, met with alumni in China and renewed academic relationships with Chinese institutions in a weeklong visit by Stephen Freedman, Ph.D., provost, David A. Gautschi, Ph.D., dean of the Graduate School of Business Administration, and other Fordham officials.

“The alumni turnout in China, and their eagerness to be more involved in the life of the University, speaks volumes about the value of a Fordham education,” said Roger A. Milici Jr., interim vice president for development and University relations. “We are blessed with engaged alumni who are generous with their time, talent and finances. The enthusiasm and commitment of our China alumni is consistent with Fordham’s plans to grow further as a global institution.”

The relationship between Fordham and Peking University began in 1998 with the Beijing International MBA program (BiMBA), a joint offering between Fordham’s Graduate School of Business Administration and Peking University’s China Center for Economic Research.  The two institutions further expanded the relationship in 2010 with the launch of a second degree, the Master of Science in Global Finance, the inaugural cohort of which began in Beijing, ending their studies with a five-week session in New York City.

At the reception, Freedman introduced Ho-Mou Wu, Ph.D., executive vice-president of the National School of Development. Freedman and Wu participated in a ceremonial signing of the memorandum of understanding between the two schools for the MSIR in front of an enthusiastic audience that included alumni of the inaugural class of Master of Science in Global Finance.

Wu spoke about “building on the oasis of our past successes,” and said that the National School of Development treasured the friendship and partnership with Fordham. He shared the stage with John Zhuang Yang, Ph.D., dean of BiMBA, who addressed the gathering, and said its theme was the two great institutions’ shared vision and values.

“We value our deep connection to the National School of Development precisely because of the values we share, “Freedman said, “and the tremendous benefits that accrue to students of both schools.”

Gautschi spoke about the transformation that China has seen over the last few years, and the importance of being there at this particular moment in history. He prompted MSGF alumni with his opening line: “New York is my campus…” to which the group responded, “Fordham is my school.”

Jeffrey Tian-Jing, an alumnus of the inaugural MSGF class and the BiMBA program, and head of public relations for China COSCO, a Chinese-government owned company and one of the largest shipping companies worldwide, spoke about the relevance and importance of his BiMBA and MSGF degrees, during this historical period in China. He acknowledged the friendship of NASDAQ OMX in inviting the cohort to ring the opening bell, and of Sandy Frucher, vice chair of the NASDAQ, in particular, for opening his home to the students on their visit to New York last summer. Tian Jing stressed the importance of the MSIR degree, learned first hand from his experience as investor relationship manager for COSCO.

Gong-Lu Lu, Ph.D., of the China Securities Regulatory Commission (the Chinese equivalent of the U.S. Securities and Exchange Commission), and an alumnus of Peking University, spoke about Chinese capital market success and prospects.

Caitlin Tramel, Fordham’s director of alumni relations, was also struck by the alumni turnout and the warmth with which the University delegation was received by their Chinese counterparts and alumni of both institutions.

“I was impressed by the openness and friendliness of everyone with whom we met,” Tramel said. “The alumni we spoke to clearly valued the Fordham connection, not just because they believe it has advanced their careers, but from genuine affection and respect for their faculty and classmates.”

During the visit, Freedman explored an expansion of the relationship between Fordham and Peking University, in particular the potential for cooperation between the latter’s Law School and School of Journalism and Communication and their Fordham counterparts.

The Fordham delegation also met with faculty and leaders from Shanghai University of Finance and Economics, to discuss the progress and sustainability of the recently established joint graduate program, and to explore further cooperation with the institution. Freedman, Vice President Zhongfei Zhou and Chunyong Ai, dean of the School of Statistics and Management and associate dean of the School of Business at Shanghai University, expressed commitment and support for the two institutions.

On March 19 and 20, the Fordham delegation was invited to attend the Invest in America 2011 Summit in Guangzhou. Freedman spoke on higher education in the United States, in particular discussing educational opportunities at Fordham University and specific plans for the Graduate School of Business Administration, both in China and in the United States.