skip to main content
Return to Fordham University
You are at:Home»Business and Economics»Bringing the Federal Reserve and Wall Street Into the Classroom

One of the many little-known services undertaken by the Federal Reserve Bank of New York is to hold and move gold for central banks from other countries. Vault employees moved the bars of gold from one country’s locker to another country’s locker. Workers wear magnesium shoes in case they drop a bar on their feet. As a security precaution, the responsibility of unlocking the vaults in the morning falls to economists of certain rank, like it did with Paul Bennett, PhD, clinical professor of finance and business economics at the Gabelli School of Business.

“It is kind of cool,” he said, noting that the physical move of gold bars represents a tiny fraction of the trillions in currency that move through the Federal Reserve every single day. 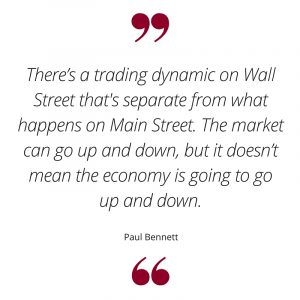 Analyzing how those trillions move falls to economists like Bennett, who, after spending more than 20 years at the reserve, rose through the ranks to become senior vice president. He eventually left the reserve to become chief economist at the New York Stock Exchange from 2001 to 2008.

With a stock market career bookended by the 9/11 terrorist attacks and the 2008 financial crisis, it’s not surprising that Bennett takes a cool analytic approach to contemporary issues facing the economy and the markets, one which manifests itself in a course he teaches titled “Contemporary Issues in Finance, Managerial Economics, and Macroeconomics.”

Bennett does not diminish the human cost of terrorism or the economic downturn. But he points out that the markets continued to function and recover after 9/11 and again in 2008. He said that people often forget that the post-9/11 recession began with a tech bubble that burst well before the attacks.

“Clearly the markets preformed badly in the wake of the attacks but they came back pretty quick,” he said. “The New York Stock Exchange continued to function in the 1930s even after prices were very depressed and the U.S. economy was in the doghouse.”

He said that terrorism, such as the ongoing attacks by ISIS, probably would not affect the markets or the U.S. economy very much. He reiterated President Obama’s point of view, from his final State of the Union address, that the U.S. economy is the “strongest, most durable economy in the world.”

Bennett was quick to note the distinction between the markets and the economy.

“The U.S. stock market is not as integrated with the U.S. economy as some imagine. There’s a trading dynamic on Wall Street that’s separate from what happens on Main Street. The market can go up and down, but it doesn’t mean the economy is going to go up and down,” he said.

Bennett’s views on the economy developed in two environments that he said were culturally distinct: the University of Chicago, where he got his undergraduate degree, and Princeton University, where he earned his doctoral degree.

“I did have a sense that Chicago was idiosyncratic in terms of its view especially when it comes to macroeconomics; it had a monetarist ideology influenced by Milton Friedman. Princeton was in a Keynesian tradition. The way macroeconomics was taught was completely different in the two places.”

He said that Chicago “did real world” analysis whereas Princeton was heavy on economic models, equations and the language of math. A Princeton-educated economist usually went into academia—but not Bennett.

“I wanted to go do something that applied to the real world, in New York,” he said.

During his 20-year career at the Federal Reserve, he played many roles at the bank, with research being one component. He also supervised transactions between the big banks. And he advised the president of the New York Federal Reserve who in his role as vice chairman of the Federal Open Market Committee (FOMC) influences monitory policy, such as interest rates.

“It was gratifying to brief the (NY Fed) president before every FOMC meeting and say this is important and here’s some research you have to keep in mind,” he said.

Macroeconomics and a Stabilized Economy

Macroeconomics, he said, is essentially “thinking about the stability of the economy.”

“It is not something that’s intellectually fun. It’s a practical issue in modern societies: trying to understand what to do if there is a recession or what kinds of things can be done to avoid periods of inflation.”

“The reason all these fancy models don’t work so well is because there’s a randomness to human endeavors you really can’t forecast,” he said. “Still, I don’t think it’s just an accident that the U.S. economy has been stable.”

He pointed to the fact that, since the Great Depression, the field of economics has grown tremendously in this country. Of the 75 individuals who have received the Nobel Prize in economics, 53 were from the United States.

“These are things that we (Americans) have actually gotten kind of good at,” he said.