skip to main content
Return to Fordham University
You are at:Home»Business and Economics»Believing in Blockchain and Bitcoin
Tyler and Cameron Winklevoss discuss their early investment in Bitcoin. (Photos by Dana Maxson)
In kicking off a panel discussion on blockchain technology, ING Americas President and CEO Gerald Walker said that his Dutch-based international bank might seem an unlikely sponsor of an event associated with “a radical model that could bypass banks.” 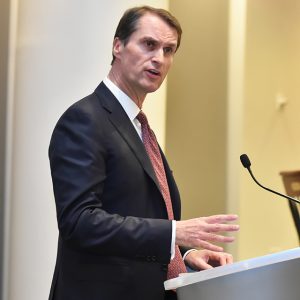 Walker was one of several speakers marking the book release of The Truth Machine: Blockchain and the Future of Everything (St. Martin’s Press, 2018) by Michael J. Casey and Paul Vigna. He and the authors were also joined by blockchain engineer Joseph Lubin, founder of ConsenSys; financial adviser Joshua Brown; and Tyler and Cameron Winklevoss, co-founders of Gemini, a digital asset exchange.

Today, said Cameron Winklevoss, businesses are at the “bottom of the first inning” for cryptocurrencies. He and his brother, Tyler, began investing back in bitcoin in 2012, and he said the two haven’t looked back, in spite of volatility.

As Bitcoin billionaires, the Winklevosses spoke positively of the controversial cryptocurrency.

“Wall Street armies are amassing at the border” to begin investing, Cameron said. “Bitcoin has more lives than a cat; every day it lives on.” 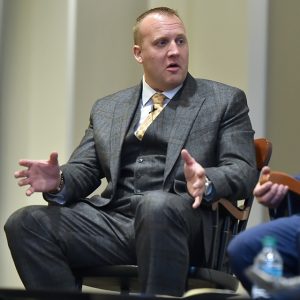 Brown said that he was an early naysayer, but has since converted to cautious optimism. He couched his concerns within an historic context: he expects there to be a big bust for cryptocurrencies, but such busts have happened before and they have not always been a bad thing.

When innovative industries go bust, they also can lay groundwork for newer industries that swoop in and reuse the infrastructure. He said the 2008 tech bust left behind the fiber optic networks now used by companies like YouTube.

“If we look back at the dot com era, that was a bubble and a bust,” he said. “Most of the companies died and some survived, but every one of those companies drove learning. And the people who worked there drove a lot of creativity as well as destruction.”

He said the same patterns of boom and bust were happening as far back as a century ago with canal systems and railways. 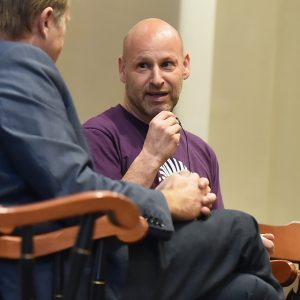 Lubin, one of the initial creators of blockchain technology, argued that such financial destruction is what blockchain seeks to avoid. He started working on blockchain after witnessing a “moral and financial bankruptcy” in economic as well as political systems.

“I could see a cascading collapse, and there was no good way to grow our way out,” he said.

Lubin said that, after reading the Satoshi Nakamoto white paper, “Bitcoin: A Peer-to-Peer Electronic Cash System,” he sensed an opportunity and became an expert in the underlying technology.

He saw blockchain as a new trusted infrastructure that makes it feasible for software developers to create a clean separation between the protocol levels and not rely on “protocol priests,” to build every new application.

“It’s a way of distributing control to content creators with far fewer intermediators,” he said. In order to effect change on Wall Street, “let’s not occupy, let’s build.”

“It’s the movement of all our foundational analogue forms—paper, rubber stamps, and subjective interpretation of rules,” he continued. “If all these elements move onto blockchains, then we can see any transaction involving those things cleared and settled over days and weeks [instead of months].”

He noted that corporations are beginning to like the technology, but a lot of work remains to be done.

Casey agreed. “This is not a static technology,” he said.

In addition to ING event was also co-sponsored by the Museum of American Finance, Investopedia and the Gabelli School of Business.