skip to main content
Return to Fordham University
You are at:Home»Business and Economics»At the Gabelli School, a Discipline that Highlights Alternative Ways to Invest

The invitation to the Alternative Investment Club’s awards event indicated the dress was casual, so you would have been forgiven for expecting to see a polo shirt or two. Maybe a pair of sneakers.

But Tognino Hall on April 29 was filled with students strictly in business attire. Suits, ties, and dresses. It lent additional professionalism to the proceedings, which saw awards given, investment recommendations presented, and alumni honored.

But the gravitas would come as no surprise to those who know the focused students who comprise the AI Club membership and who are completing the academic concentration developed by Kevin Mirabile, DPS. 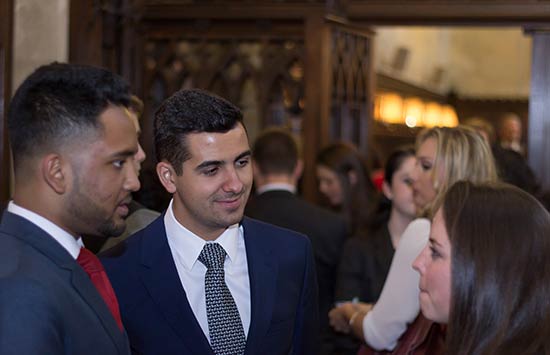 What distinguishes the Gabelli School of Business AI students—who earn their academic stripes by completing three courses in niche areas of finance such as hedge funds, private equity, real-estate investing, and venture capital—can be summed up in one word, said the club’s incoming president (pictured above), and rising senior Jeremy Fague:

In just four years, that commitment has led the AI Club from being a tiny subset of the Finance Society to a 150-student-strong juggernaut that thrives on alumni support, networking, and sheer determination.

“That’s what stands out about Fordham students,” said Fague. “Commitment, drive, knowing what you want and trying to do your best to get there.”

Relatively new, alternative investments has become a Fordham University success story, in numbers and results. Both the academic concentration and the extracurricular organization focus on the practical understanding and practice of investing in areas outside of traditional assets such as bonds, stocks, and cash. Many alternatives, such as hedge funds and real estate, are complex in nature and appeal to institutions or high-worth individual investors.

The alternative investments concentration is riding the wind of change in the industry. Not too long ago, it was something of a mysterious stranger in the finance world. Hedge funds, which are often small shops with relatively few employees, have received a generous amount of negative press over the past few years despite their relative success in the market.

But alternatives have become mainstream. As the industry has grown, Mirabile said, from $6 trillion to $10 trillion in four years, the infrastructure around it has grown as well.

“Firms are getting larger, trying to achieve scale, and they all want to have institutional-quality programs with more internally generated staff, better support, and infrastructure roles,” Mirabile, a clinical assistant professor of finance, told the audience at the AI Club’s event. “This means an opportunity for our students now and in the future.”

Choosing this academic discipline is paying off. Seven Gabelli School AI students have internships with Goldman Sachs this summer, working on everything from securities to global investment research. So far, 16 of the 19 seniors in the concentration’s résumé book either have job offers or are going to graduate school, Mirabile said.

In addition, Fordham is one of only 32 universities that have joined with the Chartered Alternative Investment Analyst Association(CAIA) to provide more educational opportunities for students interested in alternatives. Students who obtain CAIA recognition by passing one or more of its certification exams—which are analogs of the chartered financial analyst tests for the alternatives field—will have a leg up when it comes to employment.

AI at Fordham is unique in that the student club plays a principal role in academic life.

“It was part of a desire to build a program that included a high level of student engagement and external networking,” Mirabile said of the club’s beginnings.

The club also builds a “bench” for Fordham’s AI contingent: While the three-course academic concentration is open only to juniors and seniors, the club welcomes freshmen and sophomores as well, helping them get started on their interests early.

It has an active student-written newsletter and a charitable arm, which raised thousands of dollars for charities such as Hedge Funds Care and A Leg to Stand On.

Mirabile said private equity, venture capitalists, and hedge fund leaders are traditionally very philanthropic, so the students’ involvement in charitable ventures fits into the goals of the club as well. 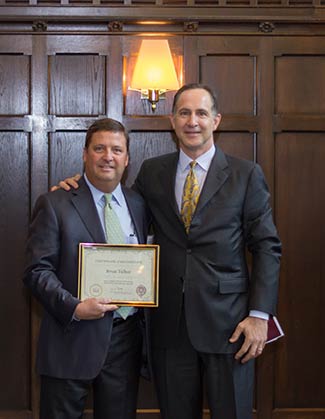 “Obviously, being part of a Jesuit school, it is really important to give back and to have that sense of commitment to your community,” said Jillian Stackman, GABELLI ’15, who captained the club’s charitable efforts this year.

Behind it all is Mirabile, a former hedge fund chief operating officer and author of Hedge Fund Investing: A Practical Guide to Investor Motivation, Manager Profits and Fund Performance (Wiley 2013).

While the students have done a tremendous amount of work in growing the club, they all pay homage to Mirabile, who they say takes a personal interest in their success.

Mirabile’s work was recognized on May 14, when he received the Gabelli School’s Faculty Magis Award for striving for excellence.

The future appears set for the club and the concentration, but, as one would expect from its leaders, no one is resting. Fague has an ambitious agenda for the coming year. And with an enthusiastic professor, passionate students, and a growing industry, more success awaits.