skip to main content
Return to Fordham University
You are at:Home»Business and Economics»The Future of Work: Be Ready for Change
Donna Rapaccioli and Manny Chirico. Photos by Chris Taggart
As part of the celebration of its past, the Gabelli School of Business took the opportunity on March 5 to look ahead. Two decades ahead, in fact.

“Work 2040: Future of Work in a Sustainable World,” a daylong Gabelli School centennial event held at the Lincoln Center campus, brought together leaders from the private sector and academia to share their thoughts, hopes, and dreams with Gabelli School students, faculty and alumni for the way people across the globe will earn their keep in 20 years.

The day kicked off with a “fireside chat” between Donna Rapaccioli, Ph.D., dean of the Gabelli School, and Emanuel “Manny” Chirico, GABELLI ’79, chairman and CEO, PVH Corp. Chirico, whose firm hosted the January kickoff celebration of the Gabelli School’s centennial, said the key to surviving and thriving in business is accepting that volatility and unpredictability are the norm now. Resilience and nimbleness must be built into any long-term plans.

“There’s more uncertainty today, and you have to accept that as part of how you’re going to manage your business,” he said, citing the coronavirus outbreak as an example.

“You have to build a business-planning process that allows you to be flexible and adjust, and a workforce that is highly resilient and can deal with constant change coming at them. That’s what we constantly talk about. I don’t know what’s coming around the corner, but I know there’s going to be something.”

He noted that the apparel industry—of which PVH is a major player, with brands such as Calvin Klein and Tommy Hilfiger—has already been subject to major changes over the last five years. In addition to shifts toward online sales, there will continue to be challenges with supply chains. One of the unexpected side effects of shifting production to Bangladesh from China, for instance, was that factories that could once be built horizontally now had to be built vertically, thus increasing risks to workers. After an eight-story building in Dhaka collapsed in 2013, killing 1,134 people, Chirico said the industry made major changes to ensure it wouldn’t happen again.

Balancing profit and purpose is always going to always be tough, he said. PVH, for instance, has set an ambitious goal to protect the global climate by reducing energy use, driving a 30% reduction in its supply chain emissions by 2030, a tall order for a company that currently generates 65% of its profits and 50% of its sales from overseas, and must therefore negotiate myriad government regulations and incentives.

“Each of the decisions we make is impacting our associates, our consumers, our suppliers, communities where we operate, and society at large,” he said.

“People want to work for companies they can be proud of. It’s not just about the check you take home every week.”

One thing he said he did not see happening is the return of manufacturing of toys and clothes to the United States.

“Would you rather work in an office or a service environment, or would you rather be in a factory in the deep south, sewing dress shirts in 95-degree heat for minimum wage and still be uncompetitive with other parts of the world? That’s romanticizing an industry here in the United States that once was. It’s just not practical and doesn’t make sense,” he said.

Bringing Business Schools into the Conversation 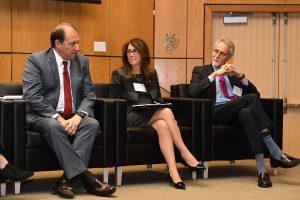 There was a broad consensus that business schools bear some responsibility for the decisions that were made leading up to the 2008 financial crisis, and therefore, graduates should be trained differently.

Boulding said that corporations long ago abandoned the old model of elevating the person with the highest IQ to CEO and simply letting that person tell everyone else what to do. The strongest team, he said, is going to be more successful than the smartest person, which is why there is now an emphasis on recruiting students with high levels of DQ, or decency quotient.

You can find signs of DQ in a prospective student’s letters of recommendation, he said, as well as admission interviews. If an applicant responds to a question by answering another question they prefer to talk about, that’s a red flag. At Duke, he said they also ask candidates to share 25 random facts about themselves.

“Each one of those facts will truly be random, but when you put them together in total, it’s not going to be random at all. It’s going to reflect who you are and what you care about,” he said.

“Some people are ‘me, me, me, me, me,’ and then you have other people who show humility, a sense of humor, make fun of themselves, and you have people who elevate moments when they were able to celebrate someone else’s success.”

Rapaccioli said one of the ways the Gabelli School is working to prepare students for these challenges is increased group projects, where students are forced to refine their communication skills.

“You’re placed on teams, and we almost hope that you have a dysfunctional experience, because you can then use it as a learning experience, and, you know [think], ‘What do I do when this happens in the future?” she said. 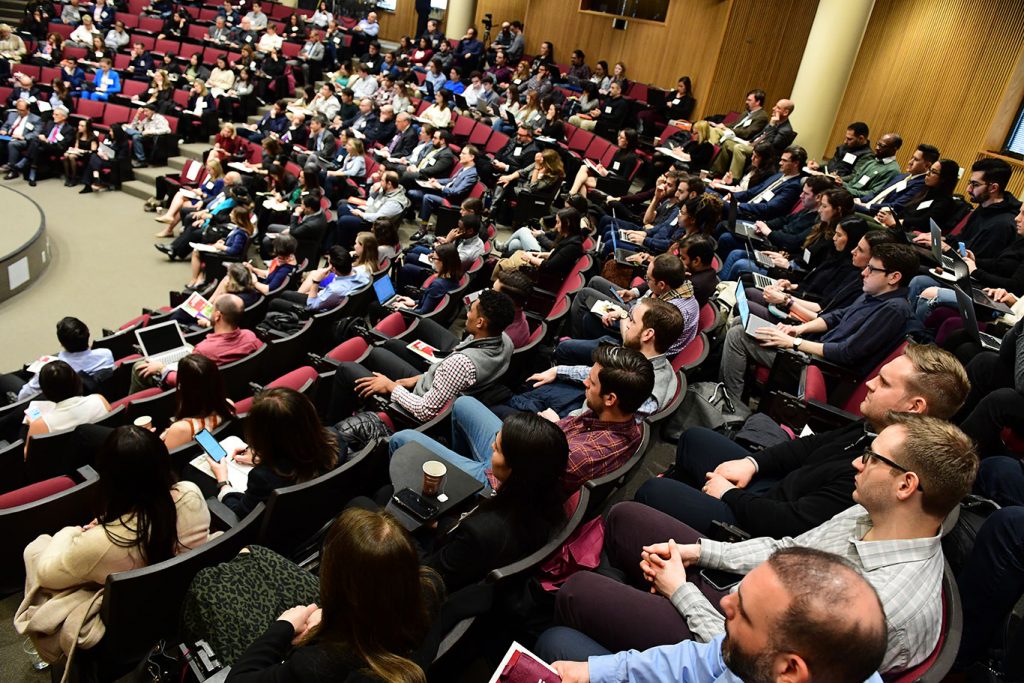 The conference drew students, alumni, and leaders in private sector and academia.